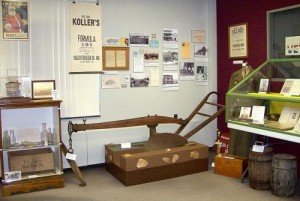 Here’s the history of the recently opened historical museum in southern York County’s Glen Rock, according to borough historian John Huffnagel: ‘During the Sesquicentennial, Harold Fritz brought a plow made in Glen Rock in the 1880s into Sesquicentennial Headquarters for display. After the celebration was over, Fritz said he “would donate the plow if we had a room to display it.” ‘ That lit the fire to officially organize a museum committee.’ So the 150th anniversary of the borough in 2010 spawned the idea that formed the Glen Rock Historic Preservation Society’s museum. For more on the museum, check out this York, Pa., Daily Record/Sunday News story.  (See additional photo below.) Also of interest: Check out this photograph of the Glen Rock Museum‘s exterior.

Many of no more, as that site is being prepared for development:

This update, courtesy of the York Daily Record/Sunday News:

“All that’s left of the largest building that once stood on Harley-Davidson’s West Campus is a concrete pad, said spokesman Michael DiMauro.

“By the end of January, all demolition will be complete on the company’s site, and the western portion will be handed over to the York County Industrial Development Authority, he said.

“The authority purchased the land from Harley for $500,000 after the company announced it would consolidate operations.

“Most of the buildings on the West Campus will be knocked down, except for the former tour center, which houses usable office space.”

And concerning tour centers, a special, paid tour is being offered at the Harley-Davidson plant on the East Campus of that large site.

Images of JoePa: The photograph of Joe Paterno that made up the front page of the York Daily Record/Sunday News in covering his death is available for sale. A poster of a JoePa as a young and veteran coach is also available. And images of JoePa that YDR photographer Jason Plotkin collected over the years are also available.

York on TV: The Haines Shoe House is featured on MTV’s ‘Extreme Cribs,’ a show specializing in, well, showy shelters. Viewers familiar with the outside of the the Shoe House but who have never seen its interior will learn something.

Blog post of the day: The stone wall that provided the Confederates with such good cover at Marye’s Heights in Fredericksburg, Va., is profiled in Scott Mingus’ recent Cannonball post.

Forum of the day: Well, the weather is fine, but people still have snow photos from the recent fall. Only York’s Joan Concilio is collecting some over at her blog.

An early 1900s drum in the Glen Rock Museum.