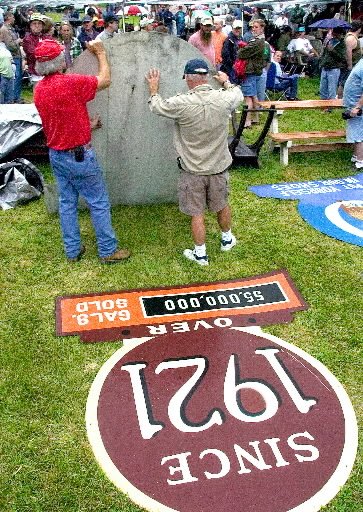 When the landmark Lincoln Highway Garage was prepped for demolition in 2004, its signs drew a lot of interest. The garage had guarded the east entrance to York since shortly after the opening of the Lincoln Highway. It was replaced on East Market Street by a Turkey Hill, custom built to reflect some of the features of the old garage.(See rendering below.) The Turkey Hill/Lincoln Highway Garage exchange also reflected a difference in the way motorists filled up with gas – self service v. full service, one-stop shopping v. a stop for gas and a separate stop for groceries. This summer, a motorcade will pass through York celebrating the 100th anniversary of the Lincoln Highway. Also of interest: How one spot in York County, Pa., tells much about what is going on around there.

The Lincoln Highway was a big deal when it poked through York on its way to the West Coast in the 1910s.

Route 30 has subsumed or bypassed Route 462 or Market Street in recent decades so the reminders of the 100-year-old roadway came by way of businesses and buildings – the old Lincoln Highway Drive-in, Lincoln Highway Garage (both now demolished) and the still standing Lincoln Way Bowling Center and Lincolnway Elementary.

This summer a motorcade will pass through York County in observance of the 100th anniversary of the old highway.

Maybe that will be a moment when all of York County will remember the old road and all it meant to east-west transportation. In fact, as people have observed over the years, without the highway you couldn’t get from east to west in York County. Or vice versa. And some pundits would say that given traffic congestion, you still can’t.

A motorcade of about 100 antique and vintage vehicles will pass through York County next year on its way to Nebraska to celebrate the 100th anniversary of Lincoln Highway.

The 100th anniversary celebration will be July 1 in Kearney, Neb., the halfway point of the highway. A second motorcade will leave from the West Coast and meet the East Coast motorcade in the middle.

The East Coast motorcade is set to pass through York County on June 23 before stopping for the night in Chambersburg.
Peters, who participated in an organized tour of Lincoln Highway in 2003, said participants “have varied reasons for making the trip.”

“Mainly (they) are interested in the historical aspects of the first transcontinental highway in the U.S. Others are auto enthusiasts who enjoy getting out on the open road,” Peters said in an email.
Peters said the tour will assemble June 21 at the Holiday Inn in Secaucus, N.J., and depart from Times Square in New York City on June 22. After the two motorcades meet in the middle, they can continue through to the next coast or head back home.

The highway, once mostly dirt roads later improved with brick and gravel, Peters said, has become a major roadway for those traveling from coast to coast.

– These yorktownsquare.com posts touch on the Lincoln Highway, in full or in part. 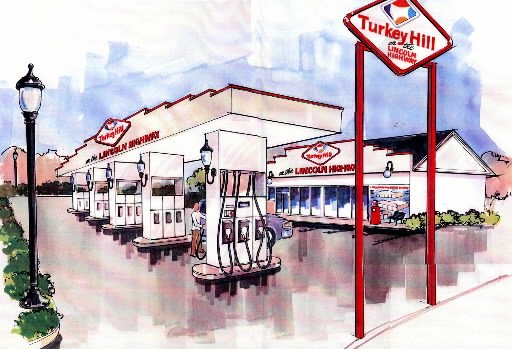 This artist’s rendering shows the plans for a Turkey Hill at the site of the Lincoln Highway Garage on East Market Street in York. The actual building looks similar to the drawing.