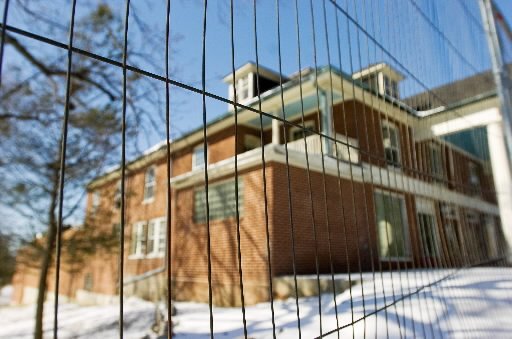 The Cyclorama Center at the Gettysburg (Pa.) National Military Park is pictured in 2000. The Cyclorama painting has since been moved to the new visitors center, where it is being restored. The National Park Service has the go-ahead to raze this old Cyclorama building, pending resolution of a lawsuit, and accompanying visitors center. Today is the last day the old visitors center, with its Electric Map, will be open to the public. (Update, 7/15: The old center has long since come down, and crowds of people now daily walk through the doors of the new center.) Who is Bob Kinsley, builder of the new Gettysburg Visitor Center?, Gettysburg’s vaunted Electric Map to soon stop blinking and Restored Gettysburg Cyclorama arriving in new home.

Those looking for a Sunday afternoon drive – today, April 13 – can head for one last look at the old Gettysburg Visitors Center, with its accompanying Electric Map.
And then head over to do a windshield tour of the new center… .

That new center, sans Cyclorama which will be unveiled in the fall, is set to open April 14.
So, if you’re free Monday … .
Here’s an update of the centers, courtesy of the York Daily Record/Sunday News:

Crowds of local residents got a sneak peek at the new Gettysburg Museum and Visitor Center late last week in preparation for its official opening Monday.
Traffic headed to the center was heavy and the center’s parking lots were full. John Latschar, the Gettysburg National Military Park superintendent, loved it.
“To me, it’s a great omen,” Latschar said. “If the community accepts this museum, then we’ve got it made.”
People have today to see the old visitor center and its electric map before the center closes and the map is put in storage.
Thursday’s opening was the first glance at the new center for most of the residents who showed up, many of whom are familiar with the old center on Taneytown Road and the sometimes-controversial process of building a visitor center with a price tag of $103 million.
However, the majority said they were impressed with the center’s design and storyline concept.
“I think they did a nice job,” said Gettysburg resident Bill Henderson. “It’s almost too much information.”
Henderson took a tour through the museum’s 11 exhibit galleries with his 15-year-old daughter Stephanie, who said she was most impressed by the interactive touch screens. As for how the new center compares to the old one, Gettysburg resident George Gelles used the metaphor “from a tent to a palace.”
“There’s no comparison,” Gelles said.
Gettysburg residents Tom and Mindy Johnston said they came Thursday to find out what was inside the 139,000-square-foot center that they drive by all the time.
“We were really impressed,” Mindy Johnston said, adding that the 22-minute feature film A New Birth of Freedom stood out the most.
Gettysburg Borough Council President Dick Peterson toured the museum Thursday for the first time and said he too had only good things to say.
“The museum is laid out beautifully,” Peterson said. “It’s got something for everybody.”
Also touring for the first time was Gene Golden, the owner of Gettysburg Signs and co-administrator of the online forum BoroughVent.com — a site dedicated to Gettysburg issues whose users are frequently critical of the Park Service.
Golden said he would have liked to see more artifacts on display throughout the exhibits.
“It’s heavy on the story, a little light on the artifacts,” he said. “Maybe that’s for some people.”
New visitor center
WHEN: Open daily, beginning Monday. Today is the last day to visit the old visitor center and the last day to see the electric map.
WHERE: Accessible from Taneytown Road or Baltimore Pike exits off U.S. 15.
HOURS: Winter, 8 a.m.-5 p.m.; spring and fall, 8 a.m.-6 p.m.; summer, 8 a.m.-7 p.m. Closed Thanksgiving Day, Christmas Day and New Year’s Day.
TICKET PRICES: Museum admission is free. Tickets to the feature film “A New Birth of Freedom” will be $8 for adults (ages 13 and up), $6.50 for youth (ages 6-12) and free for children (ages 5 and under) from April 14 to Sept. 25. Beginning Sept. 26, combined admission to the film and Gettysburg Cyclorama painting and related exhibits will be $12 for adults and $10 for youth.
PHONE: (866) 889-1243.
ON THE WEB: http://www.gettysburgfoundation.org or http://www.nps.gov/gett