Old Gettysburg Cyclorama building: Visit this round landmark while it still stands 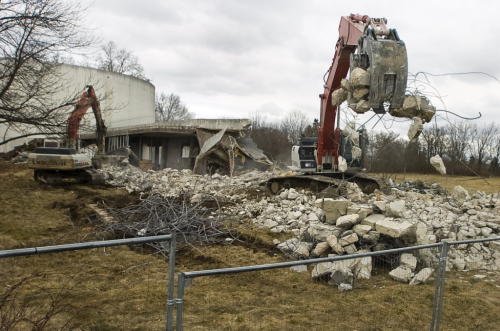 The low, once-sprawling administrative wing of the old Cyclorama building is gone, as demolition contractors smashed into the landmark last week. The goal is to have it down by the end of April, Gettysburg National Military Park Superintendent Bob Kirby said. Also of interest: Last photographs of the old Gettysburg visitors center before it came down several years ago.

The old Gettysburg Cyclorama building is coming down, despite protests to keep it up or move it.

Now  fans of the old circular building can only stop by to pay their respects.

At least at this writing, the landmark round part – the building that housed the circular painting – is standing today. So people from York County and all over were stopping by over there over the weekend to see it one last time.

It’s a bit like a viewing before the funeral.

The demolition work is slated to be completed by the end of April.

Surprisingly, the National Park Service is not planning to completely restore the site in time for 150th anniversary observances in early July.

In the end, nostalgia did not provide enough currency to save this memorable structure.

Not every building can or should be saved. Regrettably, the old circular building is in that category.

Look how far the old Gettysburg Cyclorama building has deteriorated

At least the old Gettysburg Electric Map, even with its old building gone, will blink again – in nearby Hanover 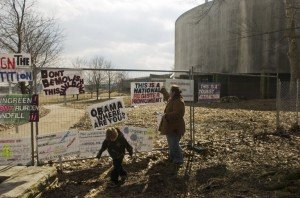 The protests of demolition at the Gettysburg Cyclorama building, from a couple weeks back, were to no avail. Notice the deterioration evident in the landmark circular building. Check out these stories and photographs that touch on the cyclorama building.