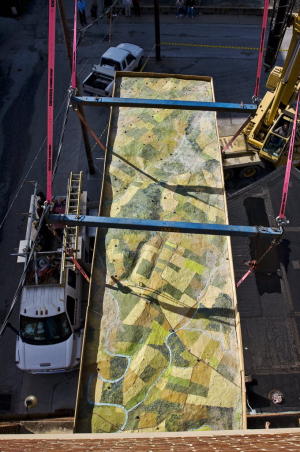 A piece of the Electric Map, late of Gettysburg and how with a Hanover address, is lifted to the second floor of the former Wachovia Bank this week. The four pieces that make up the map weigh in at 12 tons. The old map, which oriented visitors to the visitors center since the early 1960s, will be the star of a new tourist attraction in Hanover. It will open in time for the 150th anniversary of the battles of Gettysburg and Hanover in mid-2013. But here’s a question posed by a reader: Whatever happened to the predecessor of this Electric Map? If you know, please comment below. (See additional photograph of the map below and check out the Hanover Evening Sun story telling about the move-in: Electric Map finds new home in Hanover.) Also of interest: Check out these photos of the Electric Map in storage in Gettysburg, before its move to Hanover.

Can you believe it? The Cuban Missile Crisis is nearing 50 years old. Ydr.com. is collecting memories of that tense American moment as part of an upcoming ‘Remember’ oral history story.

Here’s a caption that goes with that call for memories:

“U.S. President John F. Kennedy reports to the nation on the status of the Cuban crisis from Washington, D.C. on Nov. 2, 1962. He told radio and television listeners that Soviet missile bases “are being destroyed” and that U.S. air surveillance would continue until effective international inspection is arranged. U.S. government conclusions about the missile bases, he said, are based on aerial photographs made Nov. 1.”

Blog post of the day: Buffy’s World explores the 63rd Halloween Parade and other Halloween happenings around town.

Buildup to Election Day – No. 1: As U.S. president, did George Washington ever sleep here? Background: This working list details presidential visits to York and Adams counties

Buildup to Election Day – No. 2: What did a York countian do to make old Hickory lose his temper? Background: Andrew Jackson slides into York. 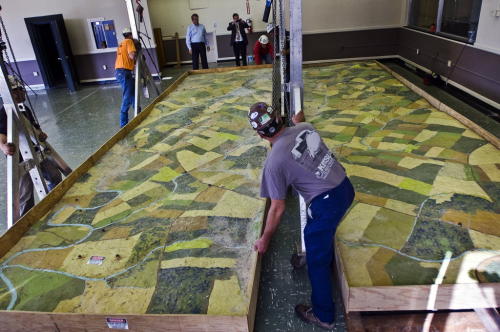 The Electric Map settles into its new Hanover home.