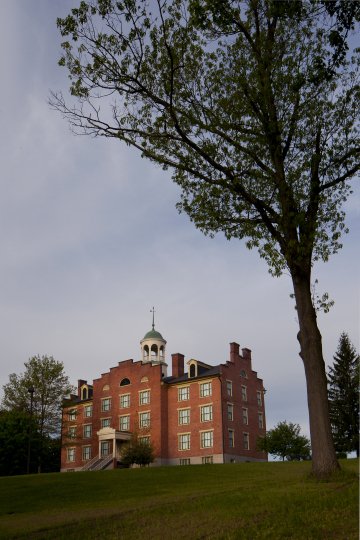 Noel Kline arose early to get this photograph of Lutheran Theological Seminary’s Schmucker Hall at sunrise in May 2013. A month later, the scene was less tranquil as re-enacters were camping around that area as part of Gettysburg 150 observances. ‘Old Dorm,’ as it was called, was dedicated as a museum as part of that event. Today, the building, which served as a hospital in the Battle of Gettysburg, offers 20,000 square feet of interactive exhibits. A museum brochure states that the museum is ‘where the Voices of Duty and Devotion come to life in 20,000 square feet of interactive exhibit galleries to educate generations and to stimulate awareness of human character, causes and consequences of war and the enduring American spirit.’ That is a worthy sentiment on a day that America honors Martin Luther King Jr. The winter, with relatively few tourists, provides an easy opportunity to see Gettysburg sites. Noel Kline submitted this photo to ydr.com’s online Your Photos gallery.  Also of interest: Shoes, other artifacts found in walls of Seminary Ridge museum.

Scott Mingus‘ “Extra Billy” Smith’s book just received a big award. Smith commanded a brigade of Confederates in the occupation of York and the Battle of Gettysburg .

The honor, the Nathan Bedford Forrest History Book Award, is granted to writers targeting Southern history from the Colonial period to today. A news release states that the award focuses on writing style, depth of research  and contribution to historiography.

American Acme in Ariz:  Patrick O’Brien lives in Williams, Ariz., but he has a York connection.

He acquired  a York County-made sled in Bisbee, Ariz.

He was seeking to date it and was looking to contact Jeff Sipling in Spring Grove, a collector.

He later made the contact with Jeff and discovered his sled is a 1950ish model. Jeff emailed many pics with his sleds and their history.

It’s interesting and refreshing that Patrick in Arizona, not necessarily associated with snow, would have such an interest in this Emigsville-made sled.