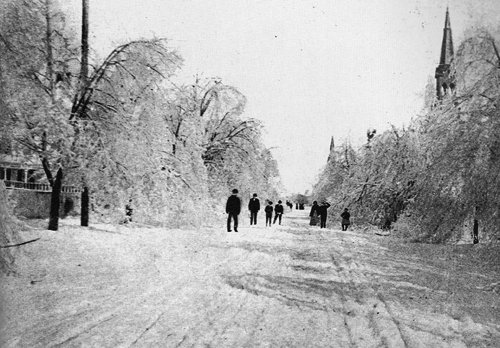 A heavy snowfall hit southern York County, Pa., circa 1905. This scene looks north on south Main Street in Shrewsbury. That’s the Reformed Church, right, and Christ Lutheran Church’s steeple in the background in this photo appearing in Bob Ketenheim’s “Around Shrewsbury.” Farther north and south from this scene, trees were planted along the road, later the Susquehanna Trail, to honor those who served in World War I.  Some of those stands live today. Also of interest:  York County, Pa., boroughs offer tasty slice of small-town life.

York’s Barry Ness poses a tough question, which I’ll turn over to readers.

Why do black walnut trees seem to be planted near roads?

“While riding I encounter this problem of those green colored, round objects covering sections of these secondary roads, AND just a few days/weeks later there is a lot of this smush on the roadway,” he wrote.

That results in a black, tarry substance and small, round objects that seem to come from those green items.

“I’m getting awfully tired of cleaning this ‘smush’ from the tires, fenders, body parts from my motorcycles plus the cars,” he wrote.

He asked: Why do these trees always seem to grow near roads?

Some stand today, particularly the sycamores lining the Trail between Loganville and Shrewsbury, south of York.

Another stand grows along the Trail, between Shrewsbury and the Maryland line.

But what about the location of those pesky black walnut trees?

Visit these posts for information about Bob Ketenheim’s other books on New Freedom and Glen Rock. Information from his Arcadia Publishing’s “Around Shrewsbury” appears in the caption above.