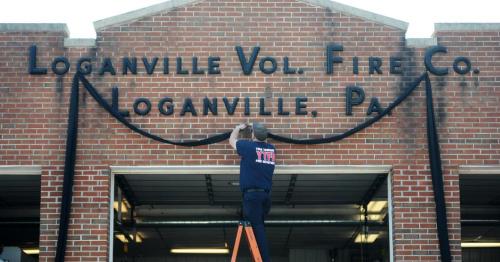 The Loganville Fire Company pays its respects to its chief, Rodney Miller, who died in the line of duty Saturday. The Loganville community – and the far reaches of York County – are mourning the loss of this respected firefighter. Also of interest:  Loganville, a close-knit borough, was the hometown of Art Glatfelter, whose company offers insurance services to emergency responders.

A caption with the York Daily Record/Sunday News photograph (see below) captures Fire Chief Rodney Miller at the scene an explosion and fire at Adhesives Research near Loganville in 2006.

The caption, as well as the photograph, says a lot about Rodney Miller’s dedication and grit. 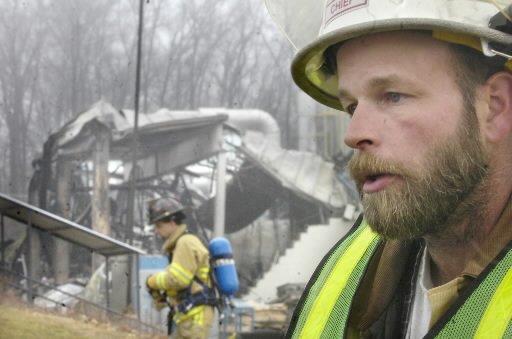 Rodney Miller is at the scene of the Adhesives Research explosion in January 2006. The damaged storage facility in Springfield Township is behind him.

At that time, the chief had been awake for 30 hours.

When asked how long he had been awake, he responded: ‘What day is it?’

Rodney Miller was killed while directing traffic at the scene of an accident on Interstate 83.

He is part of an alarming and growing number of emergency and law enforcement officers killed in the line of duty in the past 20 years.

According to the Police Heritage Museum in York, two police officers died on the job before 1994:

In the past 20 years, we’ve had the following in the line of duty deaths involving York/Adams emergency and law enforcement officers:

It’s alarming how these numbers are escalating.

This yorktownsquare.com post provides additional information and links about these officers.