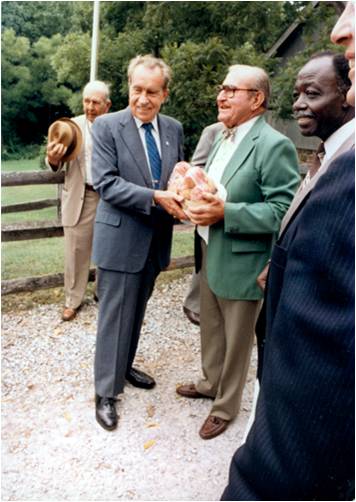 P. Joseph Raab presents a fruit basket to Richard Nixon during the former president’s visit to his namesake park. Voni B. Grimes is seen next to Raab, and John Hope Anderson is pictured at left in background. York County parks seeking mementos and President Buchanan’s fall reflected his presidency.
Voni B. Grimes remembers Richard Nixon’s late-1980s visit to the Jacobus county park that bears his name.
He recalls seeing strange men among the trees of the park’s trails – Secret Service agents – during the former president’s 45-minute stay… .
Someone mentioned to Nixon that Grimes’ own name appears on a building – the Voni B. Grimes Gym in York… .

Nixon became more attentive and asked Grimes if he played football, basketball or some other sport.
Grimes informed the former president that the honor came from his community involvement.
Nixon replied, ” Good. Good. That’s fine.”
To this day, Grimes recounts the story with a bit of a catch.
“It couldn’t be … academics … .,” the former Penn State York adminstrator stated.
Richard Nixon’s name became attached to the park as a condition of its donation to the county parks system. Bob Hoffman, owner of the beautiful tract, set the condition, and the county accepted it, Grimes said.
The parks system will use a photo of Nixon and Grimes together as part of the county parks’ 40th anniversary this year.