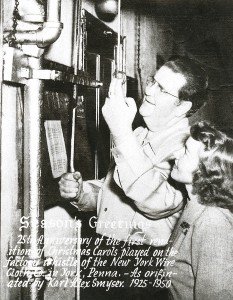 With the news that the New York Wire Factory Whistle Concert is moving to Metso, one might wonder how the annual Christmas Eve concert came about, in the first place. This season’s greetings card put the orchestration in the hands of Karl Alex Smyser. He’s shown here in the narrow room at New York Wire in York, Pa., where successor whistlemasters – notably Don Ryan – stood to play the steam- – now air – powered instrument, made possible by the whistle’s unusual sliding valve. Recently, the York, Pa., Daily Record/Sunday News has suggested in an editorial that the Christmastime concert be extended to other times of the year – the 4th of July, for example. With its proximity to Santander Stadium, formerly  Sovereign Bank Stadium. (Everything is changing around York, eh?) ‘Take Me out to the Ballgame,’ factory whistle style, anyone? Also of interest: Check out these stories and photos about the New York Wire concert.

There has been all kinds of activity off Kenneth Road behind some thick woods and underbrush.

It was hard to tell what was going back there at the old farmhouse, so it’s great that ydr.com tells us: A West Manchester Township church – Calvary Temple Assembly of God – is preparing the site for a new home some day.

Workers found some neat stuff back there: Some old cars and jugs, including those made by Pfaltzgraff.

At Dachau: Hanover Evening Sun did this insightful story about a WWII veteran – Norman Coulson – who stayed on at Dachau after liberation to help rebuild human lives.