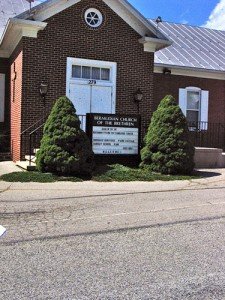 Some members of the Seventh Day Baptist settlement from mid-1700s were absorbed into the Bermudian Church of the Brethren in Washington Township. An interesting contemporary tidbit about the church is that worship begins at 8 a.m. on Sunday. That’s early by today’s standards, but probably not out of line for worshippers of old. Also of interest: The day that 20,000-60,000 Brethren assembled in York, Pa.

All six pieces will be profiled. Elmer Q. Gleim’s piece profiles the Seventh Day Baptist settlement in Washington Township. That group has intrigued me since I studied the life and times of former member Solomon Meyer, who ran the German-language York Gazette in the late 1700s.

Title: “The Beissel Influence in York County”
Author:  Elmer Q. Gleim
About: A community of Seventh Day Baptists, a congregation that observed the Sabbath on Saturday, thrived on the banks of the Bermudian Creek in Washington Township in western York County in the mid-1700s. The group was affiliated with the Ephrata Cloister, popular today as a Lancaster County historical site.
Quotable: “The German Baptists (Brethren) and the Seventh Day Baptists even found occasions to conduct Love Feasts together. They occasionally married into each other’s groups. William Penn’s dream that people of different faiths could dwell together in peace appeared to be a reality.”
Interesting point: These York County families, among others, might have forebears tied to the Beissel Bermudian settlement: Cook, Kimmel, Meilly, Fahnestock, Reeder, Hardmann, Knepper and Nagle.

Also of interest:
– Mother Codorus has long served as leading light in obscure Dunkard Valley.
– 2011 scholarly journal not dense at all.
– Solomon Meyer ‘forsook the publishing business and betook himself elsewhere’

The journal is available at the York County Heritage Trust, 250 E. Market St., for $6.95. The new journal and the initial 2010 publication are available for $10.