New word here: spionnetje. And they were once all around York, Pa. 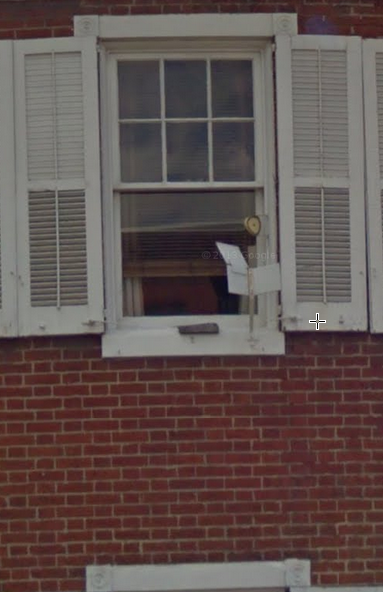 York County’s Tom Gibson recalls this spionnetje or spying mirror was mounted on the south side of York’s East Market Street, maybe the 300 or 400 block. He captured this scene about three or four years ago and doesn’t know if it’s still there. Also of interest: York reader afflicted with ‘storiophilia’ finds parking garages fascinating, too.

Tom Gibson observes York County and its history with interest and often offers interesting topics to look into.

Such happened via this recent email:

“About fifty years ago, I remember many spionnetje or spying mirrors all over town, especially on Market and King Streets.

“Some were quite fancy with three or more mirrors to allow viewing up and down the street with a small mirror to see who was at the front door.

“Were these unique to the Pennsylvania Dutch in York? Do you have any information on any remaining mirrors in York? Can they still be purchased?

“I guess they have been pretty much replaced by cameras today, but a bit of unique York history for investigation?

“How do you pronounce spionnetje? (spy on edge)?”

First, it’s pretty amazing and impressive that Tom would even know the word for such an obscure artifact.

So when you google “spionnetje,” you find photographs of the spying mirrors and a Dutch Wikipedia entry that leads to “spion,” as in “espionage.”

So that’s not Pennsylvania Dutch or German, and no doubt the mirrors can be found everywhere in the world.

Tom’s right. Technology in the form of cameras have replaced these old mirrors. And another form of technology – TV dishes – have sprouted from the facades of city homes, keeping people indoors and away from safety concerns on the street.

But really, crime has been with us forever. York County was founded in 1749 in large part because of the need for a sheriff. And there’s this story from 1899, when vandalism was a grave concern in the early years of Farquhar Park: Since its earliest years, Farquhar Park has represented a hilltop prize in York, Pa.

But here’s Tom’s question: Are any such mirrors on the side of buildings around York?

Also of interest
I looked for the mirror in Tom Gibson’s photo, above, and couldn’t immediately find it in the blocks he mentioned.