New throwback lights on Susquehanna River span: ‘This bridge is going to be beautiful’ 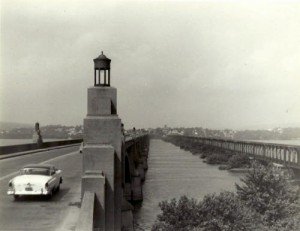 See that lamp on the Columbia-Wrightsville Bridge, aka Veterans Memorial Bridge, soon after its opening in 1930? They’ll be back or something like them as part of bridge relighting project. This photo came from a bridge souvenir booklet. Interestingly, this bridge lighting work is coming on the 200th anniversary of the opening of the first of six bridges across the Susquehanna at Wrightsville and Columbia. Also of interest: Absorbing photo and overlay show locations of six Susquehanna River bridges.

The older of the two bridges crossing the Susquehanna River at Wrightsville is receiving new throwback lights.

The cast iron lanterns will be replicas of the original lights installed on Veterans Memorial Bridge in 1930. 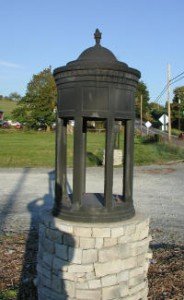 When engineers designed the new lighting fixtures for Veterans Memorial Bridge, they didn’t have to go far to find an original. This lamp sits along East Prospect Road in York County.

Those tall pole fixtures that have been on there for years don’t fit the design of the art deco bridge, according to a York Daily Record/Sunday News story on the project.

The new lights have been expected for years.

Sam Sulkosky, Columbia’s borough manager, gave this simple prediction about the lighting project: ‘This bridge is going to be beautiful.’

But that’s not the only enhancement that has been put forth. Some years ago, plans for a seventh bridge to cross the mile-wide river, a pedestrian bridge, were put forth.

A seventh bridge. Now the number “7” means complete in biblical terms. So that would be a good way to round off the spans that first crossed the river in 1814, 200 years ago.

Over the decades, investments over – and along – the Susquehanna River often have paid off.

– To see old lanterns from a Harrisburg bridge that ended up in York County, see: Canal Road.

– Check out how tolls were collected in the bridge’s first 12 years.

– This familiar building in Wrightsville served as headquarters for the toll bridge.