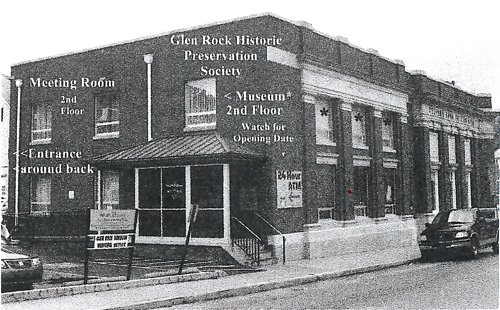 Glen Rock is getting a new museum. The grand opening and ribbon cutting is set for 2 p.m., Jan. 22, at the museum, in the Peoples Bank building. This photograph, from The ‘Item’ Review, Glen Rock Historic Preservation Society’s winter newsletter, locates the museum. The society is involved in many community activities, including a walking tour named ‘Walk Around the Rock.’ Also in 2012, the Glen Rock Mill Inn, the original Glen Rock Mill, observes its 175th anniversary. And a holiday train show opens Nov. 25. Also of interest: ‘These 1912 drivers!’ and other stories around Glen Rock’.

The mystery about family members of pioneering York City Police Officer Amos Palmer has been solved.

In a recent post, Jan Paul Arends from the Netherlands purchased photographs of Palmer and the Jackson family from York, Pa.

We put out his query on this blog and received this note from Holland:

” I’m already in contact with Douglas Smallwood Sr., son-in-law of the late Amos Palmer. He recognized his and his wife’s family in the scanned slides on Flickr last evening. So I guess we’ve hit the bullseye already.”

Waiting game: Remember that headless statue in Gettysburg, made so by vandals? Reheading work has been delayed.

Enticing headline? Check this out: Gettysburg Foundation to take over ‘Lincoln Bedroom’

Recommended blog post of the day: Best of blogs -The case of the missing cemetery statue to how to handle houseguests who aren’t green.

Forum of the day: Something new: A space for your original writing.