Neiman Craley, only Democrat congressman in York County in the past 52 years, gained another neat seat 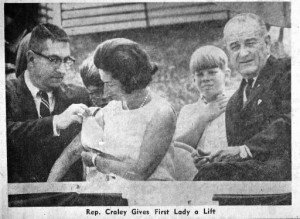 ‘Rep. Craley Gives First Lady a Lift.’ That’s U.S. Rep. Neiman Craley of York. Craley played host to Lyndon Baines Johnson/Lady Bird Johnson’s visit to Dallastown in 1966. Democrat Neiman Craley was the only congressman with the “D-York County” designation between 1960 and 2012. Next year, will a Democrat join Craley on the Democrat side of the ledger representing York County? Also of interest: 10 stories capture the lives and times of U.S. congressmen from York County, Pa.

He bested incumbent George Goodling and occupied the seat for two years before a regrouped Goodling ousted him. The Democrat in 2012, Harry Perkinson, will have an uphill fight in recouping the Democrat seat in Congress against GOP nominee Scott Perry, given the large Republican registration lead. Perry gained about 35,000 votes last night in getting the GOP nod; Perkinson about 14,000.

Craley’s noteworthy act in that tenure? He brought Lyndon Baines Johnson to Dallastown’s centennial celebration in 1966. Craley served as grand marshal of the parade honoring Johnson and the borough’s birthday.

But Craley went on to another very interesting position.

For almost 20 years, Craley served as commissioner for public affairs in Micronesia – that means the Mariana, Marshall, Caroline and Gilbert islands near Guam.

All this reminds me of another former politician from York County who took a neat seat after leaving office. Former York Mayor William J. Althaus gained a governing post in Macedonia. Althaus worked for contractors, under the U.S. Agency for International Development, in helping establish local governments primarily in Macedonia.

After N. Neiman Craley Jr. died Sunday, many of his colleagues recalled the un- flappable calm with which he led York County’s Democratic Party as chairman in the early 1990s.

According to family members who spoke at his memorial service on Wednesday morning, that coolness in the face of opposition was a defining characteristic, whether the crisis was a typhoon or a cat using his suitcase as a litterbox.

Craley was the last Democrat to occupy a congressional seat from York County, leading the 19th Congressional District from 1965 to 1967.

He had been in poor health in recent years, receiving kidney dialysis three times a week. On Sunday, at the age of 78, he suffered a heart attack in his Glen Rock home and died.

Phil Avillo, a York College history professor who is running as a Democrat against incumbent U.S. Rep. Todd Platts, R-York County, for the 19th District in November, was there as well.

Avillo said he had met Craley only twice, but that Craley had agreed to serve as the honorary chairman of his campaign.

“We were looking to him for inspiration, guidance and enthusiasm,” Avillo said. “All of which, in the short time I knew him, he provided us.”

During Wednesday’s memorial service, one of Craley’s sons, Nathaniel Craley of Virginia, shared some memories. He dwelled not on his father’s time as a politician in Pennsylvania but the years that Neiman Craley spent as a statesman in the Pacific.

From 1967 to 1985, Neiman Craley served as commissioner for public affairs in Micronesia, which includes the Mariana, Marshall, Caroline and Gilbert islands near Guam.

On the miniscule tropical island of Saipan, Neiman Craley and his family occupied a concrete house that was built to withstand the frequent typhoons and that was subject to frequent accompanying power outages.

The family had few diversions in the form of television, restaurants or theaters, and spent a lot of time playing cards. But Neiman Craley loved the place and frequently went to work with a back sunburned bright red from his time spent enjoying the spectacular views that local snorkeling afforded.

He commuted to work each day by motor scooter and spent the majority of his time there working for the islanders’ independence. The locals returned his appreciation and affection, aided — Nathaniel Craley admitted — by his father’s frequent luncheons and well-stocked bar.

“He was indeed deserving of it,” Nathaniel Craley said.

One of Neiman Craley’s stepdaughters, Patricia Razeghi, also of Virginia, recalled the tumultuous period when the family was getting ready to move to the Pacific, and she was still getting to know her stepfather. During a stop-over in California, the family cat apparently mistook his open suitcase for a litter box.

Her stepfather didn’t get angry and saw the humor in the situation, a fact that impresses Razeghi to this day.

“He took everything that came his way with the most amazing grace and good humor,” she said.