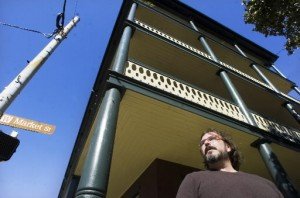 The National House, aka the old National Hotel, has seen many businesses and visitors – author Charles Dickens and U.S. President Martin Van Buren – over the years. Now,  a new business is planned. Scott Eden, pictured here, will open  a taproom in the first floor of this landmark, at the corner of Beaver and Market Streets in York. The name Holy Hound could bring you back to 1828, when the National House opened. The Red Lion Tavern, for example, opened in the 1800s. The taproom is indicative of the boutique-like businesses that are starting to open around York City. (See photograph below of the National House soon after it opened.) Also of interest: Revised map of York, Continental Square provides snapshot of how far we have come.

Developer Tim Pasch’s decision to sell property presumed to be the site of a Revolutionary War POW camp was not universally acclaimed.

Arguments against the sell of the Camp Security site to preservationists go like this: There is a sentiment that you can’t save everything, that’s another property off the tax rolls and there’s no structure on the site.

Keri Leaman – Camp Security is a special piece of land that needs to be preserved. How many Revolutionary War prison camps still exist? The debate of preservation vs. property rights will always be a part of it, unfortunately.

George Beasley – Have no tomorrow without a past… .

Cassie Durham – Completely agree with Keri and George! I recently found out my grandfather several generations back served at Camp Security!

Carrie Evans Graff – We need history to teach our future. I am more worried about preserving the past for our future generations than money lost.

Colonial Stewartstown – Students at Stewartstown Elementary just went through a slate of Revolutionary War activities. Perhaps such students in the future will visit a restored Camp Security site in Springettsbury Township.

Green in Fawn – A recent ydr.com story features a Fawn Township farmer using green practices. Actually, farmers have been recycling and spreading and practicing green for years. But it’s interesting to see how Jay McGinnis is going about things on his Woolen Mill Road in Fawn Township.

Forum of the day: Earlier this year, Starbucks opened a new store at the I-83/Route 30 intersection, the closest store to its roasting plant near Manchester. A display in the store says it is one-half mile from the roasting plant. Well, maybe two miles, according to bird distance.  Have you been to the new Starbucks? Which Starbucks is your favorite in York County? Please comment below. 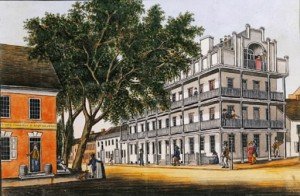 York artist William Wagner drew this scene of the National House in 1830. This photo appeared in a book of Wagner’s work, published by the York County Heritage Trust.