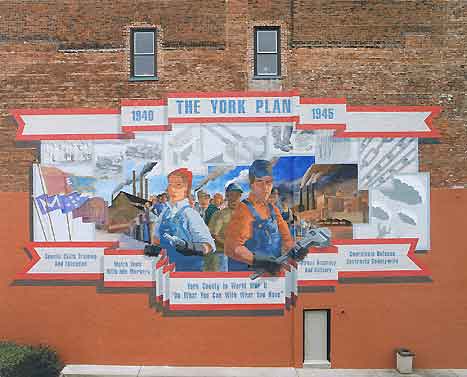 This mural, on the side of the Bell Socialization building on South George Street, observes York, Pa.’s contributions to defense work in World War II. Also of interest: Check out this Murals of York walking tour.

I hope readers of the York Sunday News on May 21 enjoyed the colorful Murals of York spread in the annual Connections edition.
I’m not aware of another time that all 18 large-scale murals gracing the sides of buildings in York have appeared in color all in one publication.
I introduced the murals with a column (Murals give updated view of York) in our Viewpoints section in which I compared the murals as a historical artifact worthy of study with a similar artifact published a century before — George Prowell’s “History of York County, Pennsylvania.”

My conclusion is that Prowell’s work overlooks the contributions of women and people of color. The Murals of York recognizes such. About half of the murals include those contributors.

The York County Heritage Trust is managing the murals. It’s my understanding that no new ones are planned.
The following large-scale mural topics were planned when the Murals of York discontinued the program in 2001-2002:

“The Conway Cabal”
“The Earliest Americans”
“The Codorus: The First Iron-Hulled Steamboat”
“The Civil War: Battle of Hanover and the Burning of the Wrightsville Bridge”
“Highways, Byways and Gateways”
“A Community of Craftsmen”