This photo sets the scene in and around Southeastern York County’s Muddy Creek Forks. It’s a Ma & Pa Railroad village that time has forgot, but this photo help people remember it. So does the photo below. Check out the Ma & Pa Railroad Heritage Village website. Also of interest: With Main Street in Stewartstown covered, historical group compiling photos of side streets and Two York County institutions meet up in Chanceford Township and Get around to seeing southeastern York County’s ornate Round Hill church.

Pat Poet lives in Mt. Wolf and came across a number of items after going through her late parents’ estate.
She’s looking for a home for them.
We’ll let her tell what she found:

“I have two almanacs from the 1800’s. A portion of the November 8, 1879, York Newspaper which includes election results. A handwritten notebook from the 1800’s showing a student’s notes from all subjects he took at school. Reading this book is a real treat. I believe it may have been written by the father of the women who raised by Dad (E. Mac Poet) in North York.
“One item I have of interest is a copy of the “PA’ Athlete” that my Dad must have obtained from Mr. Clinton Ruby, Principal of North York High School. It has Mr. Ruby’s mailing address on it at the high school. On the front of the paper it has a picture of Arnold Palmer as a 17 year old. He won the PA State Golf championship. That’s not why my Dad had this copy, although he became an excellent golfer and won the YorkTowne Golf Club championship multiple times. My Dad’s photo is in this paper also, as he won the State championship in both the discus and shot put. Apparently he was the only athlete to win two state championships that year.”

Local archives have declined the items.
Any suggestions? Contact Pat.
Local sculptor in the news: Lorann Jacobs, who has done many statues and memorials around here is doing a Civil War monument in State College.
Event of the weekend: Don’t forget Yorkblogger June Lloyd’s presentation on agriculture in York County, with a tie-in to the York Fair at 10:30 a.m. today, Sept. 11, at the York County Heritage Trust.
Blog post of the week: Speaking of June Lloyd, the Universal York blogger wrote about the six-wheeled Pullman car made in York in the early 1900s. Yes, six wheels.
Forum of the week, The Exchange: Viewers are discussing: York County Amusement Parks York has had numerous amusement parks – why not a new one? 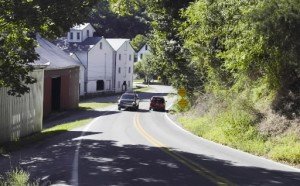 The road leading into and out of Muddy Creek Forks.