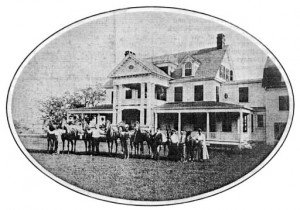 Springettsbury Township’s Meadowbrook Mansion looms in the background as riders and horses strike a pose. At the turn of the 20th century, Edwin Myers (tobacco business) brought this Georgian Revival look to the mansion. Many stories are attached to the site. Tradition has it that invading, horse-hungry Confederates visited the spread in 1863, perhaps in search of the ancestors of the mounts pictured here. This photograph came from a Meadowbrook Village brochure filed at the York County Heritage Trust. Background posts: Property rights foundational in Lauxmont debate, York County cigars: ‘They contained a vast amount of nicotine.’ and Picturesque steel bridges going way of covered bridge ancestors.

The Canada goose that sought to hatch her goslings near Borders on Whiteford Road provided an opportunity to draw lessons from the former Meadowbrook estate.
I devoted my York Sunday News column (5/11/08) to the topic, which touched on the Dempwolf architects, cigarmaking, the lives of the rich and covered bridges – and the story of Mother Goose: 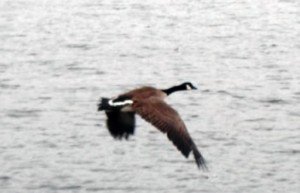 The story of Mother Goose, the mom who sought to hatch her goslings outside York County’s Borders store, brings up a gaggle of lessons about York County.
For a couple of weeks, the fate of the goose placed a spotlight on that historical corner of Springettsbury Township. She chose as her quiet nesting spot a non-tranquil piece of land that, along with its landmark house, has been a prime piece of the county’s past.
* * *
Consider the following history lessons from York County Heritage Trust files and newspaper accounts:
— The Whiteford Road nesting site is formerly part of the Meadowbrook estate, named for the nearby mansion. Edwin Myers, a turn-of-the-20th century York businessman, so tagged it.
It was a grand example of Georgian Revival architecture that contrasted greatly with modest neighboring German farmhouses.
— Meadowbrook served as a summer home for Myers and his wife, Anna Jaeger Myers. They enjoyed rural life in the latter stages of the Gilded Age, when the wealthy in York and across America enjoyed substantial in-city residences, plus oversized retreats in the country. As just one other local example, Lauxmont Farms was the rural estate of S. Forry Laucks, of York Safe & Lock fame.
— Myers made a lucrative living from wholesaling tobacco, making cigars and manufacturing cigar boxes and associated products. Others did, too. Historian George Prowell wrote in 1907 that the manufacture of cigars employed more people in York than any other industry.
Myers’ resume also demonstrated that cigarmaking spun off secondary businesses — constructing cigar boxes and printing product information on those containers.
By that time, growers had learned how to cultivate finicky tobacco in York County’s otherwise rich soil, and Myers had a piece of the business from seed to sealed cigar boxes.
— Myers spent some of his wealth revamping Meadowbrook via the architects John Bentz Hamme and Edward Leber, who had studied under J.A. Dempwolf.
Dempwolf’s firm helped shape York’s skyline with design of the York County Courthouse, now the county administrative center; the old Bon-Ton building in York, now a county office building; and York’s Central Market, still a covered market house.
Surrounded by modern retail businesses today, Myers’ old country abode, known as Christmas Tree Hill, stands out in the same way that Dempwolf buildings proudly reveal their designer.
— Historian Jim Rudisill wrote in his book “York Since 1741” that the mansion’s front porch pillars came from the cupola of the second York County Courthouse. That building was demolished in the late 1800s to make way for its successor, the current county administrative center. Perhaps it was the Dempwolf connection that delivered those pillars to his former architectural associates.
— The Meadowbrook mansion survived demolition two times in the past 25 years. A York Daily Record story from 1983 credits developer Holleran Services with saving the mansion and remodeling it into the upscale restaurant Meadowbrook Inn.
“Before its new use, it was nearly falling apart. Many of the homestead’s windows were broken and garbage was gathering,” the newspaper reported. “It was falling into ruin so fast it had only two futures: Either bulldoze it down or renovate it.”
In 1992, current owner Christmas Tree Hill purchased the mansion after the restaurant business slowed and the owner sought a buyer. At that time, a demolition permit had been secured.
—The covered pedestrian bridge spanning the pond between the Meadowbrook Village Pavilion and the Tweeter store is a nostalgic attempt to recapture a time when York County was full of covered bridges.
Today, the only covered bridge left for vehicular use touching York County connects York and Cumberland counties on the Messiah College campus. And that one has been moved upstream from Bowmansdale.
Recent news stories on Mother Goose indicated that the pond under the Meadowbrook bridge was constructed in the 1980s when the shopping center went in.
That pond recaptured the marshy terrain in that part of the former estate, which may have given the property its name.
In tending to her young on that particular spot, Mother Goose was doing what came naturally.
“(The geese) can’t help it if someone built a shopping center there,” Mark Deckard of Bird Rescue told the York Daily Record/Sunday News.
And then one stormy day, Mother Goose, in a quest for food, struck a power line feeding the shopping center.
Mother Goose survived the resulting spinal injury and is alive and flying thanks to Bird Rescue. Her goslings did not enjoy such happy a ending.
But while in the limelight, Mother Goose helped us review the lesson that the county’s development vs. agrarian land-use battle rages on.
Development might bring amenities and occasional preservation, as it did to the Meadowbrook mansion. But it can also spell loss to a way of life.
And that’s no fairy tale.