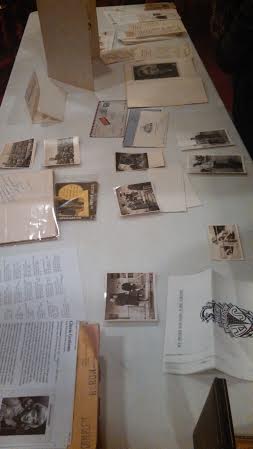 Bryan Sellers provided these artifacts about the life and times of famed Hollywood star Cameron Mitchell at January’s Glen Rock Historic Preservation Society meeting. This week, Sellers will be back at the society’s February meeting to tell about plans to permanently honor Mitchell in York County, his home county. Also of interest: Four photos give picture of Hollywood star Cameron Mitchell’s ties to York County.

These emails with Marcus bring forth a bit more about the versatile Hollywood actor with York County roots.

1. Cam the poet?  From Marcus: “I just got off the phone with my 85 year Uncle Channing, who is Cam’s last surviving sibling, and he seems quite thrilled with this renewed interest in his brother Cameron. When I went to the High Chaparral Reunion last March in Tucson, I was quite surprised at how many people liked Cam’s Uncle Buck character and his fan base on his Facebook page keeps growing. People are finding Cam’s versatility as actor, athlete (baseball, tennis and golf), and even poet very fascinating. A fan pointed out the irony of Cam’s role in The Andersonville Trial as Gen. Lew Wallace, who presided over the trial that sentenced the commandant of Andersonville prison to death, and the men of Cam’s great-grandfather’s 101st PA Regiment, most of whom were captured in 1864 and sent to Andersonville prison, where many died. This almost sounds like like a form of supernatural retribution.”

2. Cam’s Civil War link: “You might be interested in the emails below between a fan of Cameron’s, who manages Cam’s fanpage on Facebook, and myself concerning Cam’s great grandfather, Charles Wesley Mitzel (my late grandfather added an extra “L” to the name when he became a minister), who served in the 101st PA regiment in the War Between the States, as it used to be called. Roark’s (Mitzell) late father was Charles, who owned a York real estate firm and my late father was Carlyle, who was a reporter for the old GAZETTE AND DAILY.”

3. More about Cam: Here’s that information from Cam’s Facebook page –

“Cameron’s great grandfather served in the Union Army at the tail end of the Civil War. Historical research shared by Marc shows that Charles Wesley Mitzel (1843-1913) and his older brother Emmanuel joined up with the 101st Pennsylvania Regiment, Company E, commanded by Captain Cornelius McClellan in 1865 prior to the end of the war. What was left of the regiment was assigned to garrison duty at Roanoke Island (North Carolina). The documents go on to say that most members of the regiment were captured in 1864 and sent to Andersonville Prison before Charles Wesley Mitzel enlisted.

“Ironically, Cameron played Gen Lew Wallace, who wrote BEN-HUR, in a TV production directed by George C. Scott, based on a hit stage play called The Andersonville Trial, in which the head of that Confederate prison camp is put on trial for his cruelty and neglect. A clip can be found on YouTube of an intense scene of Cameron acting with William Shatner, who portrays the chief prosecutor, arguing over a legal matter during the trial.

“Charles Wesley died in 1913, five years before Cameron was born. Marc said he was known to have a hearty sense of humor. ”

Check out additional stories and photos relating to Cameron Mitchell from this blog.