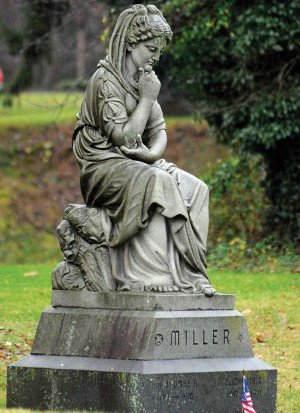 “Silence,” the cemetery marker, with strong ties to Jamestown, N.Y., did not appear to be in York, Pa.

But it’s along York Road, in Carlisle, Pa.

It all started with Lake View’s Sam Genco’s query about the Wondering Woman’s whereabouts.

A post in this blog appeared in the York Sunday News, and the quest was answered. Readers contacted Sam and, well, a Google Earth image pretty well convinced him.

The Sentinel in Carlisle then picked up the trail, and here is how its story began:

“After a journey of hundreds of miles across decades of time, a long-lost statue from New York, erected to guard the tomb of a town founder, has been found in Carlisle, thanks to the determination of one man and the helpfulness of strangers.

“The man is Sam Genco, assistant superintendent of Lake View Cemetery, Jamestown, N.Y., who has spent decades searching for a statue that disappeared from the cemetery he now oversees.”

“One would think a large, heavy, marble statue would tend to stay put once it has settled in to its resting spot, but not this one,” he wrote in an e-mail.

And here is how The Sentinel’s story ended:
“Through a Google Earth image, he’s (Genco) been able to determine that the statue is 99-percent likely the one he’s looking for. The name carved on her plinth is Miller, and she broods in Carlisle’s Ashland Cemetery, oblivious to passing traffic on busy York Road.

“On Saturday, Genco plans to make the 10-hour round trip to Carlisle to find out for sure, visiting “Silence” and meeting with Steven Ewing of Ewing Funeral Home, which owns the cemetery.

“The only person who knows the true story of her journey is, of course, “Silence,” whose name seems now all too apt.”

For the rest of the story, see:  N.Y. statue finds home in Carlisle cemetery. 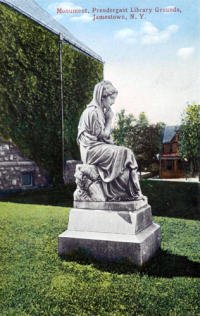 A postcard of  ‘Silence’, the Wandering Woman.