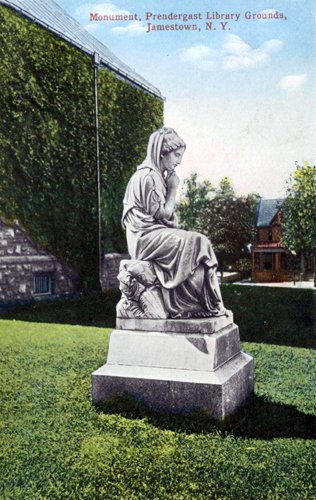 A New York cemetery official is seeking this statue, thought to be in the York area. ‘One would think a large, heavy, marble statue would tend to stay put once it has settled in to its resting spot, but not this one,’ Sam Genco wrote in an email. Also of interest:  Restoring a mausoleum. Yes, in York, Pa.

And he’s a marker sleuth on the trail of a monumental mystery, the headline he put on his email searching for the statue.

A marker originally in his Jamestown cemetery may sit somewhere in York County.

In addition to his duties at the cemetery, Sam Genco has a way with words, as evidenced by the following request for help:

” For many years now, I have been tracking the whereabouts of a statue that was once in Jamestown’s main cemetery.  In fact, it once stood on the burial lot of Jamestown’s founder – James Prendergast.  It is thought now to be in the York area – perhaps in one of its local cemeteries, or it may be someone’s lawn ornament.  Its last confirmed location was Williamsport, PA, around 1972.  One would think a large, heavy, marble statue would tend to stay put once it has settled in to its resting spot, but not this one.

“This well-traveled item is a nearly life-size statue of a woman in a seated position, somewhat reminiscent of the sculpture of Rodin’s ‘The Thinker’.  Her chin rests in the fingers of her right hand, and her left arm rests across her lap, with her left hand cupping her right elbow.  She is wearing a gown or long tunic, and the back portion of her upswept hair is covered with a hood-like scarf.  I have seen other, similar statues in other cemeteries, but this one has managed to keep a few steps ahead of me.

“This statue, which I will call “Silence” (her first known name) – apparently she can change names as easily as she changes her location – originally graced Lake View Cemetery’s Prendergast lot – a prominent spot in the older portion of the 68 acre cemetery that dates back to 1858.  The Prendergasts share residence here with about 44,000 others in Lake View’s gentle hillsides.

” ‘Silence’ was likely removed from her place of honor in the late 1880’s – about the time a massive granite monument took her place.  She was moved to the lawn of the James Prendergast Library, which just happened to be the site of Jamestown’s first organized burial ground.  Many of the burials there were moved to Lake View Cemetery shortly before the Library was erected in 1891.  A significant number of those early burials were likely missed, so her new placement didn’t really change her duties as guardian of earthly remains.

“Her post there remained secure for nearly forty years – until 1928, when it was decided she needed a change of scenery, and a little ‘face lift’.  She was taken to a local monument dealer for a “manicure and marcel”, as it was noted in the local newspaper.  It was also stated that she wouldn’t be going back to the library, as it was undergoing expansion onto her territory.

“From there her existence took an eventful turn.  In fact, she took a winter sleigh ride across the state line to the tiny village of Wrightsville, PA, about twenty miles from Jamestown.  For the next forty years she sat in the well-tended gardens of an eccentric, multi-talented gentleman named Albert C. Westren.  He was mainly a wrought iron worker, but an entertaining book could be written about his life and exploits.  He gave our statue the name ‘Deep Thought,’ and cared for her and others in his collection until his death in 1963.  Several years later, after the death of his wife, most of the family possessions were sold or auctioned off, and “Deep Thought” took a short trip about fifteen miles down the road to Clarendon, PA, to the home of an antique dealer, where visitors named her ‘Woman Meditating’.

“She stayed for only a brief visit there before embarking on a trip across the state to an auction barn in Williamsport.  From there, according to a recent conversation with the auctioneer, he believes it went to someone in the York area. He thinks it was going to be placed it in a cemetery in that area.

“Have you seen this wandering woman?  I would dearly like to find her and meet her face to face. ”

And let me know too. It would be good to see how the story or the wandering woman ends.

Wonder why this building is there?

Does this photo show an old bus shelter?

What does this mystery photo show?

Is that Elvis in the York Fair mural?

Now, what’s pictured in this photo?