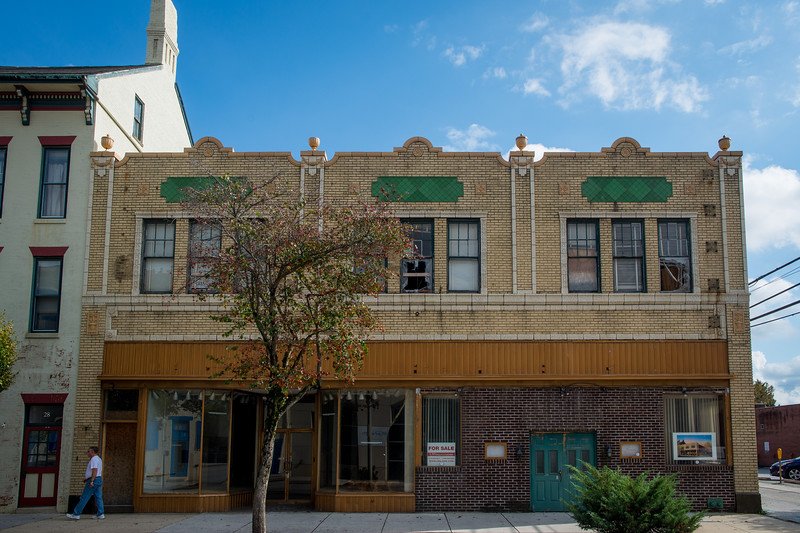 When was the last time you heard about the brands Montgomery Ward and Woolworth’s in the same week? News about the former buildings of these two retailers from days gone by came from two York County, Pa., towns last week. The Montgomery Ward building in Hanover, above, is scrubbed up and windows unboarded so prospective tenants can see the possibility.  ‘The drop ceiling has been removed, revealing the original tin ceiling, and the interior walls have been demolished,’ the Evening Sun says. Check out news about York’s Woolworth’s building below. Also of interest: All about Hanover, York County’s oldest borough.

The old Woolworth’s building on York’s West Market Street has been empty for years, but that could change. Royal Square Development is looking to revamp the building. ‘The plans include turning the ground floor of the building at 44-50 W. Market St. into three retail spaces of between 1,000 and 1,500 square feet and creating four apartments on the building’s second floor,’ the York Daily Record reports. Also of interest: At one time, York’s 5 & Dime stores lived up to their name.

She took a look at the recent archaeological dig in quest for the former British prisoner of war camp in a York Sunday News column.

Here’s a piece of that column:

“I hoped that the location of the stockade would have been discovered during the recent dig. Some accounts from the militia guards hint that there might have been more than one stockaded area. Combining accounts of the past, looking at the topography and a recent magnetic imaging survey led to the selection of the area just explored as a promising one. Surface exploration and the thorough excavation of nearly 170 test holes, however, turned up only a handful of significant artifacts, and no telltale line of soil discoloration that would have shown the location of stockade posts.

“This spot was only one of several that look promising, so there is optimism for finding the stockade location, perhaps as soon as next year.” For the complete column, see: Camp Security.
+++

#ArtifactOfTheWeek among the sketches in new book, Lewis Miller’s People, is of John Sponsler, an oyster dealer! pic.twitter.com/kLXl6rbwMM

In the blogosphere: The York County Planning Commission has launched a blog to share information on development of an Historic Preservation Plan. The county does not have such a plan, but a task force is working to fill that void.

History mystery: This YDR Facebook post drew a lot of interest. Do you know what is going on here?