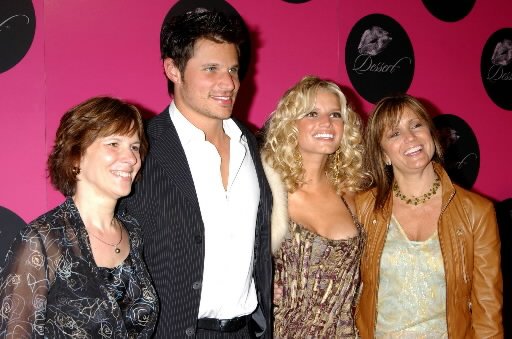 Unless one of you readers comes forth with other achievers/celebs with Dover ties, this could be last post until someone else from that York County community takes the stage.
The Dover area is home to the mother of entertainers Nick and Drew Lachey.
We’ll get back to that in a moment.
A second Dover-area resident also made national news the other day… .

Charles Jordan of Dover Township secured a rare pardon from President George Bush. He was one of 29 to receive the presidential expungement for his role in a college and professional football gambling ring in 1997.
According to press accounts, Jordan said he did not want his grandchildren to know he was a felon, so he obtained the necessary paperwork and sent it in.
That’s not the type of celebrity Dover relishes.
Anyway, back to the Lacheys. Their connection to Dover is explained in the following 2004 York Daily Record/Sunday News story (Lachey and Simpson have since divorced):

The conversation with Bruce Reinert, the manager of Dover’s Central League team, was initially about baseball. Then it went like this:
“Oh yeah, we’ve got a new sponsor this year for the ballclub. Nick Lachey.”
Pause.
“Nick Lachey?”
“Yes.”
“The Nick Lachey?”
“Yeah. Nick Lachey and Jessica Simpson are now my stepkids. I married his mother.”
Dover, Pa., is to Hollywood and MTV what toothpaste is to orange juice. But six degrees of separation just got sliced by two-thirds.
How the heck did this happen?
How is it that media darlings Nick Lachey and Jessica Simpson, the singing stars of MTV’s wildly popular reality show “Newlyweds” and one of the hottest couples in the country, now have a direct connection to Dover?
Here’s how:
Reinert, on business in Cincinnati, met a nice woman with whom he quickly established a mutual affection. Cate was her name. Reinert had no idea who she was. The two fell in love.
“Newlyweds” fans know well that the Lachey home base is Cincinnati, but Reinert wasn’t hip to that information.
Eventually, though, he started to piece some things together. At the time, he was more apt to know about Reds relief pitcher Danny Graves than 98º band members Nick or Drew Lachey.
But it helped that Nick Lachey knows Danny Graves. The Reds’ closer, in fact, was in Nick and Jessica’s wedding party in 2002.
“I didn’t really tell Bruce a lot,” Cate Reinert said. “I just told him my son, Nick, was in a (singing) group. He asked around, put some things together.
“But he found out that they’re just regular people. To him (Nick and Drew) are just my kids. Good kids.”
In fact, you don’t have to be a 98º fan to figure that out. Nick Lachey is an occasional guest on the Dan Patrick Show on ESPN Radio. He comes across as a regular, grounded guy, and a huge sports fan. His mother said sportscasting would have been Nick’s ultimate dream job.
Nick’s passion for the Reds is also no secret. He sang the national anthem at the final game at the old Riverfront Stadium, and sang the anthem again on Opening Day at Great American Ballpark last month. Talking with Cate Reinert, you figure out where Nick’s humility comes from. She comes across simply as another proud mom. She just happens to travel to Las Vegas or New York or Los Angeles every once in a while, courtesy of her famous son.
“I wanted to make sure before my boys went off to college that they knew how to do laundry and basic household things,” Cate said. “That they wouldn’t need or ever expect help. Stay grounded. They’re just regular people. … If the garbage needs to go out, it goes out.”
And so, if the garbage needs to go out on “Newlyweds,” Nick takes it out. No butlers. No hired help.
Back here, Dover baseball got a big boost this offseason when Nick offered up the services of brother Drew’s Fossik Entertainment group.
“Fossik Entertainment” will adorn the back of the Dover team’s new caps, once they arrive. The word “Fossik,” according to Cate, is an Australian word meaning “untapped resource.”
As for Cate, she’s beginning to figure out this York County townball thing. She tolerates it well, although she admits to not being a huge fan.
Since the couple married last year in Cincinnati, Cate has been attending Dover games, even when Bruce is out of town on business. With her sons, her new husband and her new step-sons, baseball has become an inescapable reality.
Bruce’s sons, Brendan and Ryan, play for the Dover team.
“I know this is serious business,” Cate said. “Bruce has a very close relationship with his boys, and I think part of that is the team. (Baseball’s) a good thing, but I try to keep it in perspective.”
Her perspective was never more clear than in January, when Bruce was seriously injured in a crash. His pickup left the road during an ice storm, and he suffered a partially lacerated aorta, a shattered hip, a concussion and a punctured lung.
Lucky to be alive, Bruce spent more than six weeks in the intensive care unit at York Hospital, with Cate by his side.
Quietly, Nick and Jessica put their busy schedules on hold to slip into town for a visit with Bruce.
While Nick talks to his mother a couple of times a week, Cate isn’t sure Dover fans should anticipate an appearance by the famous couple at a Central League ballpark this summer.
“I don’t know, their schedules are just so busy right now,” she said. “Nick’s starring on Broadway in ‘Rent.’ … They’re both all over the place.”