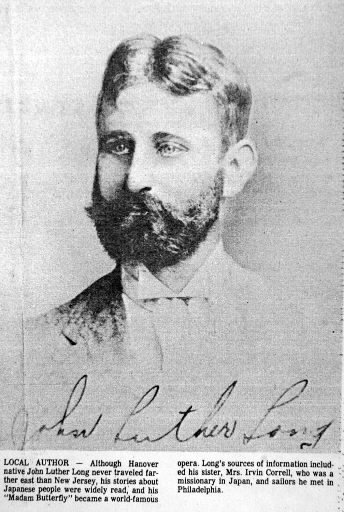 People might remember June Lloyd as the ever-helpful archivist at the York County Heritage Trust. Her column will appear on the last Sunday of each month in the York Sunday News. Her next column will appear Nov. 27.
Her first column titled “Hanover lawyer’s timeless tale” follows:

The highly acclaimed musical play “Miss Saigon” is coming soon to the Strand-Capitol Performing Arts Center. Although set in late-twentieth century Vietnam, the show has York County roots. It would not exist, nor, for that matter, would Puccini’s famed opera “Madame Butterfly,” except for the genius of Hanover native John Luther Long.
Born in Hanover in 1855, Long attended Lafayette College and then came back to Hanover to read law with Charles Wolff. He was admitted to the York County bar and subsequently moved to the Philadelphia area, where he was advised to take a rest from his law practice after a bout of poor health. This gave Long an opportunity to adapt some Japanese tales his sister and brother-in-law, Jennie and Irvin Correll, related from their long stint as missionaries to Japan.
The story of Cho-Cho-San or Butterfly, a teahouse girl who fell in love with an American sailor, particularly intrigued Long. Their marriage, unfortunately, was viewed as only a temporary arrangement by the sailor. After he returned to his own country, his Japanese wife bore him a son. Sometime later he returned to Japan with an American wife, who wanted to adopt the child and take him back to America. In disgrace with her Japanese family and rejected by her sailor, Butterfly plunged a sword into her chest.
The origins of the story are obscure. The unfaithful lover may have originally been a Russian sailor or a warrior from a foreign land. Long made his protagonist Lt. Benjamin Franklin Pinkerton of the United States Navy. Long may have also been familiar with “Madame Chrystheme,‿ an 1887 autobiographical account with a similar theme, written by Frenchman Pierre Loti. It had been published in English and was likely available in Philadelphia. Long made his Butterfly a much more sympathetic character than Loti’s hardened Chrystheme.
Century magazine published Long’s novella-length romance in 1898. New York producer and playwright David Belasco was taken with the story and turned it into a play, which opened on Broadway in 1900.
The next to be smitten was the legendary Italian composer, Giacomo Puccini. After seeing Madame Butterfly performed in London, Puccini tailored his beautiful musical score to the exotic tale, with libretto written by Luigi Illica and Giuseppe Giacosa. The opera premiered at La Scala in Milan in February 1904, but it was not well received at first. Puccini made some staging changes, and in a few months it was a rousing success, first in Italy, then London, finally triumphing at New York’s Metropolitan Opera house with the leads sung by acclaimed stars Geraldine Farrar and Enrico Caruso.
The timing of Long’s novella, Belasco’s play, and Puccini’s opera might have contributed to its wide popularity. The United States had just acquired the Philippines as a result of the Spanish-American War; Japan was just opening up to the West. There was a resulting fascination among westerners with the mysterious Orient.
“Madame Butterfly” has long been recognized as a classic, usually calling to mind Puccini’s opera. Over the years it has also been adapted to other forms from ballet to a modernized motion picture, which starred Cary Grant and Sylvia Sidney, in 1933.
At the time of the fall of Saigon, playwrights Alain Boubil and Claude-Michel Schonberg were struck by a news photograph of a Vietnamese woman at the Saigon airport giving up her child for a chance at a better life. The theme led them to “Madame Butterfly‿ and “Madame Chrystheme.” Their award-winning musical version, “Miss Saigon,‿ opened in 1989 in London and 1991 in New York.
Long went on to write numerous novels and plays. Even though none reached the heights of “Madame Butterfly,” he was evidently successful enough at his craft to give up his practice of law. He died in 1927 and is buried with his wife and son at Mt. Olivet cemetery in Hanover.
Perhaps there will be a future incarnation of the classic tale of love and leaving. Like the namesake Butterfly, the saga metamorphisized from an ancient Japanese folk tale into a representation of recent history. Native York County storyteller John Luther Long was a major catalyst in that transformation.
—-
June Lloyd recently retired after 16 years as librarian/archivist at York County Heritage Trust. She is now engaged in historical research and consulting, specializing in York County area history. See her local history blog at www.yorkblog.com/universal.