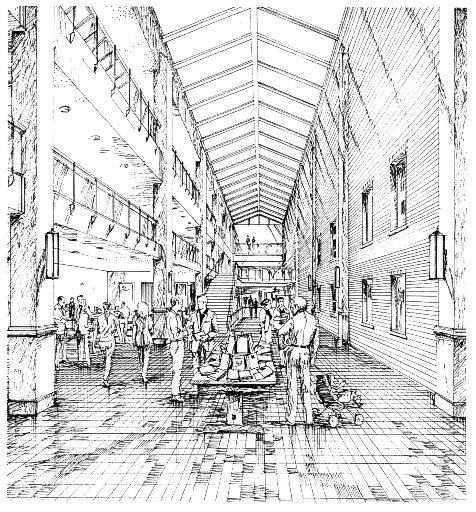 This is a 2004 rendering of York, Pa.’s, Martin Library’s grand atrium with stairway leading up to its reference desk and stacks. And guess what, this scene is well reflected the resulting renovations, complete with the many patrons moving through this central area. York County library site brings together links for local research.

Locating newspaper microfilm is bit confusing because of mergers and ownership changes of the newspapers and the actual relocation of microfilm rolls.

Bob Rambo, coordinator of InterLibrary Loans for York’s Martin Library, was one such reseacher, who had run into dead ends.

“I’m a librarian at Martin Library.  We had a patron ask us to try to track down an article from the York Sunday News from November/December of 1986.  This has become a much bigger problem than we expected.  I think part of the problem is that we aren’t sure who owned/published the York Sunday News prior to 1988.”

“Lancaster Newspapers did own the Sunday news until 1988, until our current owner purchased it. By design or luck, we do have the 1986 York Sunday News microfilm here. Joan McInnis, our librarian, can search for that article. You can contact Joan at jmcinnis@ydr.com or 771-2019.  If there’s an urgency, let me know and we’ll try another route.”

Here are some microfilm hunting/research tips:

– The Daily Record/Sunday News has York Sunday News microfilm from June 1970 through August 1988. There are some gaps, however.

– If you’re seeking YSN microfilm before that, check with Lancaster Newspapers, which published that newspaper between 1948 and 1988. (This site has some historical background as well as contact information.)

– Really, the best place to check for microfilm is the York County Heritage Trust Library. The repository there has several operational microfilm machines to roll microfilm for York County newspapers back to 1815. It has microfilm going back years for the York Daily Record and York Dispatch.

– The York Daily Record/Sunday News and yorkblog.com, via Only in York County superblogger Joan Concilio of Ask Joan fame, will answer queries and also put the questions up online and in print for the public to answer, a growing practice called crowd sourcing.

– Several history blogs on yorkblog.com, including this one, have searchable archives that go back three years or more. Try: Scott Mingus’ Cannonball and June Lloyd’s Universal York.

But as the Bob Rambo’s example illustrates, people with information needs can rely on a decades-old, respected source, the public library. Visit this resources page on Martin’s site or contact, brambo@yorklibraries.org

And to finish the story, kind of.

Last I heard, Joan McInnis found the right microfilm roll but couldn’t find the story Bob was looking for. The quest continues!