York-area memories about ‘The Oaks’ pile up 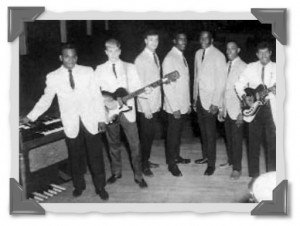 For an upcoming compilation album, Phil Schwartz has found 26 tracks from 11 bands that performed regularly at White Oak Park, better known as The Oaks. Here are the bands he has tracks for so far: The Del-Chords; El Dantes (pictured here); The Exciting Invictas; The Tranells; The Crystalaires; The Ambassadors; Seven Dwarfs; G.L. and The Vesters; The Chateaus; The Magic Monorays and The Calientes. Chris Huber, concert organizer at the Oaks in the 1960s, attributes the venue’s success to The Del-Chords, pictured here. The first night The Del-Chords played the Oaks, Huber told the York Daily Record, the line to get in lasted all night long.

It started out with a query for information about White Oak Park, and it has resulted in a number of posts here of the now-defunct Manchester Township hangout.
Phil Schwartz Sr. continues to look for Oaks memorabilia from the heyday of band battles in the 1960s. He is producing a compilation album of the regulars at the Oaks: “White Oak Park – Battle of the Bands.” Contact him at pschwa7845@aol.com.
Meanwhile, York Daily Record writer Jason Cox wrote a story last week about the Oaks:

A little north of York in Manchester Township lies a patch of land that used to be home to some of the largest parties and concerts in the county – although you’d never know it today. White Oak Park, better known as the Oaks, is no more. All that’s left is an empty parcel of land near the Masonic lodge off of Masonic Drive.
But the memories and music from that era live on. Phil Schwartz Sr., founding member of Keystone Record Collectors (KRC), a music collecting group based in Lancaster, has begun a project to preserve Oaks memories.
Schwartz became interested in the Oaks after hearing stories from Ed Lincoln, whom Schwartz dubbed “The Godfather of York rock ‘n’ roll,” and Chris Huber, who helped put on concerts at the Oaks in the 1960s.
“White Oak is legendary,” Schwartz said. “They had a regular battle of the bands thing at the concerts. Bands from York, Lancaster and Harrisburg. I’m not really sure how they determined who won, but they’d have a winner. I asked different
people what they got for winning, and they said it was bragging rights.”
Schwartz took the idea of those band battles and began work on “White Oak Park – Battle of the Bands,” a compilation album containing tracks of the various bands and artists, most of whom were regulars at the Oaks. Schwartz has taken it upon himself, with the help of a few other KRC officers, to track down music from the popular performers of the day.
Schwartz has pieced together 26 songs so far from 11 bands, pulling together demo recordings, home tapes, practice session recordings, acetates and more. He hopes to release the album sometime this summer.
“Some tracks we’ve found from old band members, and some we’ve found by dumb luck,” he said. “Somebody in the record club might’ve found something at a yard sale. Sometimes we have bad luck, too. Sometimes we get there too late.”
The park was a popular picnic area after World War II. In the early 1960s, Chris Huber, who worked in sales at WSBA-FM (910) at the time, wanted to see it become something that could compete with area music venues such as Shady Dell in Spring Garden Township. He partnered with the landowners of the park and began organizing and promoting weekly dances there. Unfortunately, things got off to a slow start.
“We ran dances on Friday evenings, and just when we were ready to close up because we couldn’t get the crowds, we got The Del-Chords one night,” 70-year-old Huber said. “From the time we opened up that night, the line to get in was there until 11 o’clock. After that, we ran dances Friday, Saturday and Sunday.”
The Del-Chords were a popular mixed race rhythm and blues group of the day from York. Some of their members later went on to form The Magnificent Men, an even more successful group. Huber said that he thinks that famous day took place in 1962, although admitted his memory wasn’t perfect. The venue continued its success for many years until the race riots of 1969.
“We closed the dances down when York had the riots,” Huber said. “It was still pretty popular, but the black and white situation was getting real bad. We felt it would be a little difficult to do. We were hiring as many as 10 police a night, and that was too much.”
Decades passed, memories faded, groups disbanded, but the music survived – even if it was a bit hard to dig up. While Schwartz has compiled plenty of songs for the planned album, he has hit a wall finding photos and other memorabilia from the Oaks.
“We have bands photos, but not at the park,” he said. “I suspect there are many pictures out there, but people lose things, leave them in the attic. It’s just a matter of getting to the right person.”
Also:
El Dantes was a popular band from the White Oak Park era, although little is known about the group today.
Additional posts on the Shady Dell or White Oak Park:
–Just try to resist this memory-tugging photo of White Oak Park.
–Stadium will be site of The Oaks music reunion
–Wanted: Old photos of teen hangout.
–Memorabilia from ‘the Oaks’ hard to come by.
–Memories of The Oaks pile up.
–Memories of The Oaks pile up – Part II
–The Dell: ‘It was like family’.
–White Oak Park welcomed Blaw-Knox workers .