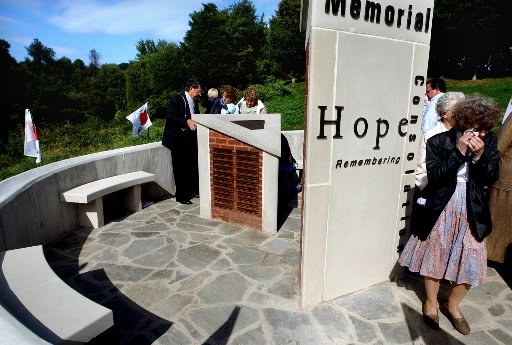 The memorial at Kain Park dedicated to victims of alcohol-related accidents was rededicated in 2003, after the original memorial ran out of space to display the names of victims. This post marks a new category on York Town Square: Unsung/obscure county sites.’ Posts on other memorials: Holocaust sculpture a York County must-see, Images capture hope for racial harmony and American War Mothers’ gesture overlooked.
As excited visitors head to the paddleboats at Kain County Park, the memorial marking victims of alcohol-related accidents can be easily overlooked.
It shouldn’t be. If all 54 names inscribed since 1980 were to die in one disaster, it would make international news. These victims mostly dying in vehicular accidents spread out over 28 years unfortunately create barely a stir… .

Many names on the monument stand out.
Here is just one:
The youngest was Jacob Michael Thomas Umphred, stillborn.
He is one of many examples lining up with the marker inscription: “Dedicated to memory of innocent victims of alcohol-related accidents.”
A York Daily Record story in 2003 highlights the monument’s rededication:

Michael Beaverson has been hit by drunken drivers twice in his life.
In 1979, the first wreck left Beaverson in the hospital for 78 days. He was hurt again in 1997, and also lost his wife, Sandy.
“(The driver) took away the best part of my life. They took away 24 years of marriage, and their mother,” Beaverson said, pointing to his two daughters, Stacy Beaverson and Tana Jacobs.
On Sunday, the family went to William H. Kain County Park for a re-dedication ceremony for a monument that bears Sandy “Sis” Beaverson’s name, and the names of dozens of others killed in alcohol-related crashes in York County.
The original monument was a special place for Stacy Beaverson. She often visits the tree-lined spot where her mother’s name and age were listed on a bronze plaque. Sometimes she would bring flowers to the tree-lined area facing Lake Redman’s boat landing and sit looking over the water.
“My mom wasn’t buried, so this is the only place I have to go,” said Stacy Beaverson, whose mother’s remains are in an urn in her sister’s home. “It’s much better than a cemetery because it’s a place that’s so full of life.”
She came out on Mother’s Day and noticed the memorial, designed by members of Students Against Drunken Driving, had been taken down. She immediately contacted the South Central Pennsylvania Chapter of Mothers Against Drunk Driving, whose members helped maintain it.
The organization told her not to worry. It had run out of room for the growing list of victims on the monument that was built in 1980, and the group needed to construct a bigger one.
For the new monument, the masonry pylon was set up by Wagman Construction on a small plot of land donated by York County. Architects from Murphy and Dittenhafer designed the memorial, and Master Gardeners of York did the landscaping.
At the ceremony, MADD chapter president Myron Bird said the difference between this memorial and others is that it has to be updated regularly.
“My fondest wish is that this would be the last time we’d be adding names to the monument,” he said.
More than 50 people, including many families who lost loved ones in crashes, attended the event. Some shared how they lost their loved ones. For the Beaversons, their lives changed after the Penn Township wreck that killed 42-year-old Sandy Beaverson on Oct. 18, 1997.
That night, she and her husband were on their way home from an Alcoholics Anonymous meeting. They’d been sober for about a year, Stacy Beaverson said.
Shortly before 10 p.m., a 1994 Chevrolet Camaro crossed over the center line and slammed head-on into the Beaversons’ 1997 Ford Explorer. The couple were taken to York Hospital, where Sandra Beaverson later died.
The Camaro’s driver was also killed in the crash. Reports showed his blood alcohol content was above 0.10, the legal definition of drunk for a driver in Pennsylvania.
Since Sandy Beaverson’s death, her oldest daughter has had two more children. Her youngest got engaged last year. Her husband still misses his best friend.
“My mom will never get to see me get married,” said Stacy Beaverson as she wiped away her tears. She called her mother, “a wise, beautiful woman. She was so full of energy.”
On Saturday, her daughters went through five boxes of photos to create a picture collage to take with them on Sunday. Some snapshots showed their mother smiling with her husband. In others, she was holding her grandchildren and cuddling her daughters.
As Jacobs kneeled down in front of the pictures, her 16-month-old daughter walked over and poked the glass holding them. Jacobs told her child, “That’s your Nana. Yes, she’s your Nana.”
Jacobs said, “(My mom) only knew my oldest son for five years and my other boy for one year. She didn’t even get to meet her two granddaughters.”
“I wish she were here,” she added.