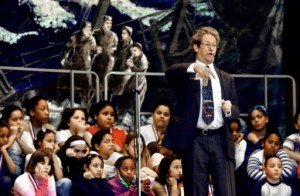 Rabbi Irwin Goldenberg addresses students at York, Pa.’s Alexander D. Goode Elementary School in 2002. A mural of Rabbi Goode and his three colleagues forms the backdrop. The occasion was Dorchester Day, taken from the name of the ship carrying the four American chaplains and hundreds of fighting men when a German torpedo sank it in 1943. The other chaplains who died with Rabbi Goode aboard the Dorchester in the north Atlantic were Father John Washington (Catholic), the Rev. Clark Poling (Dutch Reformed) and the Rev. George Fox (Methodist). Also of interest: And now starring actor … Jakie Devers?

Kenneth Kraetzer, of the Sons of the American Legion, spent four years in pursuit of a memorial for Jewish chaplains after noticing that York’s Rabbi Alexander D. Goode were not being recognized.

Rabbi Goode and three Christian chaplains, all heroes, died with arms locked when troop transport Dorchester went down in February 1943.

“Soon, they will be together again when a Jewish Chaplains memorial joins those of other faiths at Arlington National Cemetery,” a news release from Temple Beth Israel states.

On its way to Arlington, the memorial plaque will stop at York Township’s Temple Beth Israel, the congregation Rabbi Goode served before entering the service.

Congressman Todd Platts, who co-sponsored the bill authorizing the new monument, wills peak at a public recognition of the plaque at  2 p.m. Friday at the temple, 2090 Hollywood Drive.

A Hollywood-production is reportedly under way about the lives and deaths of the Four Chaplains.

The arrival of the plaque at Arlington would make an apt ending for the film.

For a view of the Mural of York honoring the Four Chaplains, visit here. 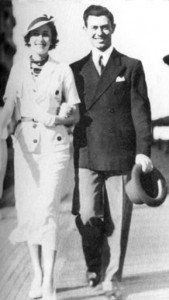