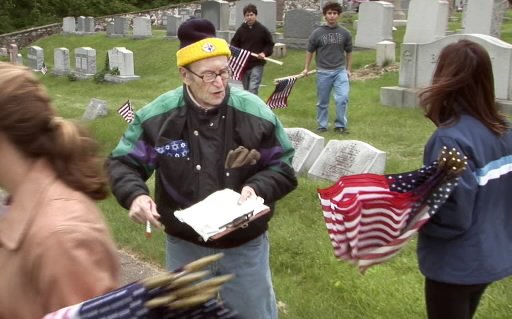 Youth group members and others from Jewish Family Services helped veteran Jerry Cohen plant flags on vets’ graves at the Jewish cemetery, south of York, before Memorial Day this week. The passing of time has left Cohen as the lone member of the local Jewish war veterans post. Background posts: ‘Chaplains: The Calm in the Chaos’, People of varying religious groups founded York County and Holocaust sculpture a York County must-see.

An AP report before Memorial Day reminded the world that World War II vets are dying at a rate of more than 1,000 a day.
About 2.5 million WW II vets are alive today, down from 16 million at war’s end, the Department of Veterans Affairs estimates.
“I think that’s low now,” said Martin Morgan, historian for the World War II Museum in New Orleans of the number of vets dying each day. “But judging by the passing of the World War I veterans, we’re predicting they will all be gone by 2020.”
In York County, just one example of the passing of the Greatest Generation comes from the local post of Jewish WWII vets … . 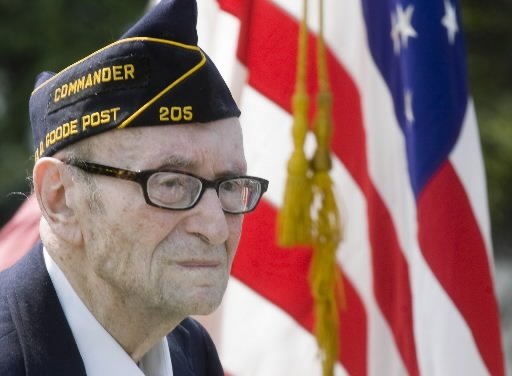 From soon after the Pearl Harbor bombing until his discharge in 1945, U.S. Army Pvt. Jerry Cohen served as a medical technician at field hospitals in the Pacific.

At one time, 50 vets made up the local chapter. One remains today, Jerry Cohen.
When Cohen’s story was posted on the Web, a commenter provided a good idea about how to honor these vets:
Register them on the official Web site for the World War II Memorial in Washington, D.C., www.WWIIMemorial.com. The registration is free for family and friends.
Here’s Jerry Cohen’s story from the York Daily Record/Sunday News:

When Jerry Cohen started planting the flags, the Jewish cemetery in York Township had just one section. Now, the graves span three.
Memorial Day comes ’round each year, and he wades deeper and deeper into South Hills Hebrew Cemetery, sticking flags in the dirt by markers that weren’t there the year before.
As fellow World War II veterans pass on, 88-year-old Cohen finds himself on lonely ground: He’s the last active member in Post 205 of the Jewish War Veterans of the USA.
“It’s a skeleton post,” he said. “I’m it.”
Veterans organizations across the country are watching their memberships dwindle as the greatest generation slips away.
Elder vets tried to recruit newbies, Cohen says, but the men who returned from Korea, Vietnam and the Middle East formed their own fraternities.
“There was no new blood coming in,” Cohen said.
He served two years in the Pacific as a private with the U.S. Army Medical Corps. He felt lucky to return safely to Pennsylvania in 1945.
Some friends didn’t come back. In his wallet, Cohen carries a photo of a dear childhood friend from Wilkes-Barre. Pilot Eugene L. Rosner was shot down over Cologne, Germany, in July 1942.
A clutch of Jewish veterans of the Civil War began the first Hebrew Union Veterans group in 1896 to protest allegations that Jews hadn’t served in battle. (More than 8,000 Jews donned Confederate gray or Union blues.)
In its heyday during the 1950s and ’60s, Post 205 counted close to 50 members, Cohen said.
He joined around ’52 when he moved to York County and opened Walk-Rite Shoes on South George Street. He lives in Springettsbury Township.
The men met monthly, gathered for drinks and chatted. They furnished the flags for the two local synagogues and prayed the Mourner’s Kaddish for the dead on Memorial Day.
They successfully lobbied the York City School Board to name a school for one of their own: Alexander D. Goode Elementary School honors the York rabbi and chaplain who in 1943 gave up his life jacket to others as his torpedoed troop ship sank in the North Atlantic.
The vets’ wives kept busy, too. The Women’s Auxiliary became active in the community. Perhaps most notable was their effort to help establish the Bell Club for people recently released from psychiatric hospitals (now Bell Socialization Services Inc.).
Over the years, attendance at post meetings dropped off, Cohen said. The crowd at the annual Memorial Day service dwindled, and the list of dead Cohen read aloud grew longer.
He has kept open the post treasury. About 10 vets still pay their dues, but most have retired to Florida. From there, they can’t assist with the post’s most important duties — honoring the memory of the dead and shielding their graves from neglect.
Each May, Cohen and his wife, Toby, collect 90 to 100 flags from the county veterans affairs office and spend a day putting the flags out at South Hills.
As the couple aged, they worried: Who would mind the veterans’ graves when they are gone?
Cohen believes he’s found a caretaker in Jewish Family Services, whose leaders have pledged to keep the tradition alive with the help of a local Jewish youth group.
“That’s our intent — to be able to make sure it gets done even when he’s no longer able to do it,” said Jessica Brein, project coordinator for Jewish Family Services.
Several youth helped the Cohens put the flags out Monday, and JFS located a bugler to play taps at Sunday’s 11 a.m. memorial.
There, in a 20-minute remembrance, the post’s last commander will salute the fallen, the departed and the heroic dead, and conclude with a prayer. It ends:
“May they rest in peace, and their memory be a blessing to all of us. Amen.”
ON THE WEB
Jewish War Veterans of the United States of America, www.jwv.org.
National Museum of Jewish American Military History, www.nmajm h.org.