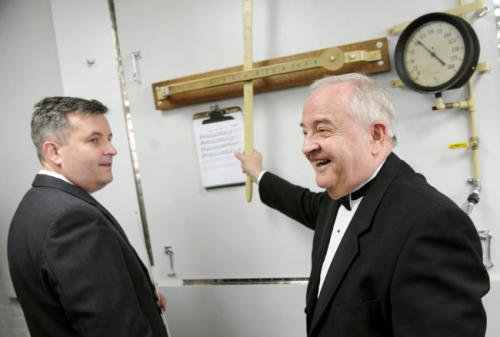 The York Factory Whistle is a low-tech, mechanical device. But the factory whistle’s annual concert will be gaining some high-tech digital features in 2014. A York, Pa., Daily Record story says the the 12:05 a.m. Christmas Day concert will be live streamed on the Factory Whistle’s website. That means it can be seen on computers and digital devices throughout the world. To add to the whistle’s digital collateral, as they say, you can learn more about this variable valve whistle at the  Factory Whistle’s Facebook page or by downloading the Whistle Master app.  The quirky whistle concert is a rite of early Christmas Day around York, Pa. It points back to the day that factory whistles in red-brick industrial plants around town ordered the days of workers – signaling the start of shifts, breaks and the end of shifts. For decades, the concert was held at New York Wire on East Market Street before moving last year to Metso Minerals Arch Street plant. Whistlemaster Don Ryan, above, right, remains at the helm. Also of interest: Check out these York Factory Whistle stories and photos and York Factory Whistle’s sound: How about like a ‘whale song without the water?’

Other interesting news from all over … .

York County, of course, has another internationally known moment on Christmas Eve/Day.

The Glen Rock Carolers, with their new statue, will stroll the streets of that southern York County borough again this year.

This comment on the York Daily Record’s venerable bulletin board The Exchange is insightful about the carolers:

“The Glen Rock Carolers are a true oddity of York County history–that top hatted carolers singing a repetoire (repertoire) of strictly 18th and 19th  century English carols would thrive and endear themselves in the thick of the Pennsylvania Germans.is beyond me.

“Many of the volk in the area kept speaking the native tongue at home and at church until the US entered “the Great War”==nearly 175 years after their ancestors had fled the Palatinate.”

Video by the band: Think Loud’s state of the art York, Pa. studio

Fascinating to see the high-end studio that has built here in York. This video by the band also gives us a peek… http://t.co/ig4X9Aphmp

Another rite of the Christmas season: Brother and sister Buddy King (Magnificent Men) and Diane Susek, well-known York, Pa.’s music world and beyond, performed at their 10th Conewago Inn holiday concert this week. Check out this story about their concert.

Civil War in art: The man behind many familiar paintings

+++
History Mystery: Who is the mystery fighting man on the weather vane?