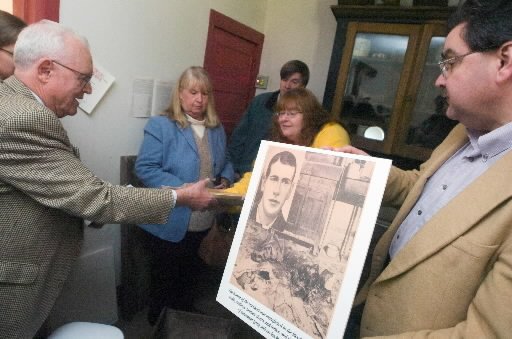 Members of the South Central Pennsylvania Genealogical Society look on as J. Ross McGinnis gives a tour of the Nelson Rehmeyer house, where the famous Hex murder occurred in 1828. The group is standing over the spot where Rehmeyer was killed. McGinnis is referencing a copy of a photograph of the kitchen depicted after the murder. Background post: Hex book: How powwow doctors plied their craft.

It was a perfect story.
The plot brought J. Ross McGinnis, the foremost authority on the Hex murder of 1928, to the site where it occurred, the Nelson Rehmeyer house in North Hopewell Township.
Not only did McGinnis write an authoritative and readable book on the murder, but he’s a master story teller to boot.
“I feel like I’m walking here on hallowed ground,” McGinnis told members of the South Central Pennsylvania Genealogical Society.
A wonderful fund-raiser for some group would bring McGinnis to the Strand-Capitol in York to tell a similar story before a showing of “Apprentice to Kill,” the 1988 film inspired by the Hex murder.
On second thought, given McGinnis’ storytelling ability, forget the film. The Strand would be filled.
The York Daily Record reported on McGinnis’ visit to the house in a story headlined: “The scene of the crime:”

J. Ross McGinnis began his story in the year 1928.
That year, East York drifter John Blymire, then 30, became convinced he was under a curse.
His wife had left him. He couldn’t keep a job. He thought witches were following him everywhere.
Because of Blymire’s beliefs, a farmer died, murder trials were mounted, and he and two others imprisoned. News accounts compared the farmer’s killing and its aftermath to the Salem witch trials.
Seventy-two years later, McGinnis published his book “Trials of Hex” about the infamous Nelson Rehmeyer murder in southern York County.
On Sunday, the author stood in the kitchen where Rehmeyer’s body was found and talked about preserving local history.
“I feel like I’m walking here on hallowed ground,” McGinnis told a private tour group inside the tiny, German farmhouse where Rehmeyer lived alone.
“This is where it all started and all took place.”
Around McGinnis, Rehmeyer’s simple furniture stood in its place. His pocket watch, his wife’s spectacles and some yellowed mail lay on a desk.
The wood-burning stove pumped heat. Only the hole in the floor boards – charred when Rehmeyer’s body and bed clothes were lit with burning lantern oil – was hidden from view so visitors wouldn’t trip.
This is the difference between talking about history and visiting it, McGinnis said.
Only visiting a site – whether the Gettysburg battlefield or the “Hex murder” house – can give a student of history the genuine feel for “how it all happened,” he said.
McGinnis commended Rickie Ebaugh, Rehmeyer’s 49-year-old great-grandson, for his efforts to restore the farmhouse in North Hopewell Township to what it would have looked like at the time of the murder, Nov. 27, 1928.
This summer, a zoning enforcement officer denied Ebaugh’s first application to convert the property into a nonprofit site for education.
“I think it’s an important part of our history,” said Robert R. Reisinger, the society’s president. “I would like to see it preserved, though I agree it’s a very narrow road and some facilities (like parking) would need to be provided.”
McGinnis spent 50 minutes recounting the tale of the Rehmeyer murder, the trials and a brief explanation of powwowing, a faith-healing tradition the Pennsylvania Dutch brought to Pennsylvania from central Europe starting in 1790.
Many York County people visited powwow doctors well into the 20th century, seeking to have “spells” or “curses” removed. Powwow advice included folk remedies for warts, headaches and other ailments.
Blymire, a powwower himself, was told he needed to bury a lock of Rehmeyer’s hair and spell book to break Rehmeyer’s curse. He convinced 18-year-old Wilbert Hess and 14-year-old John Curry to accompany him to the farmer’s house on Rehmeyer’s Hollow Road.
They knocked and awoke the powwow doctor, who admitted his would-be attackers. Rehmeyer fought back, but the trio eventually beat him to death.
More than 500 people attended Rehmeyer’s funeral at Sadler’s Church (now St. John Lutheran in Hopewell Township), McGinnis said.
During the sermon, the Rev. George E. Bowersox, didn’t refer to witchcraft, but he did pray for enlightenment so “‘that we may not practice evil arts and that we shall follow him, who said, ‘I am the light of the world!'” McGinnis said.
A lawyer, McGinnis also discussed the highly publicized trials, during which each defendant was convicted and sentenced to prison.
Those trials, McGinnis said, stood for the community’s “triumph of justice and what is right over irrationality and superstition.”

Hex House
Nelson Rehmeyer was murdered in his farm house on Rehmeyer’s Hollow Road in 1928 by three men trying to rid themselves of what they believed were life-defeating spells.
Articles compared the murder and its aftermath to the Salem witch trials more than 200 years earlier. Blymire, Hess and Curry were convicted and imprisoned. They were eventually released and lived quiet, law-abiding lives until their natural deaths.
Rickie Ebaugh, Rehmeyer’s 49-year-old great-grandson, now owns the 12-acre property where the murder occurred and hopes to open the turn-of-the-century German farmhouse as a tourist attraction to help people better understand Pennsylvania Dutch powwowing and the truth about his great-grandfather.
In August, the zoning enforcement officer in North Hopewell Township denied an application to convert the Rehmeyer House into a nonprofit site for education.
Ebaugh said Sunday that he and his wife, Gloria, plan to reapply with the township in the future.
This summer, he quit his job at York Imperial Plastics to concentrate on the Rehmeyer house project, he said.
“As time goes on, I’m the only one to get it done,” Ebaugh said. “My dream will never happen if I don’t stop working and focus on this point. … This is what we want to do – to let people see it.”