Since 1887, York mayors have dealt with the serious – and the silly 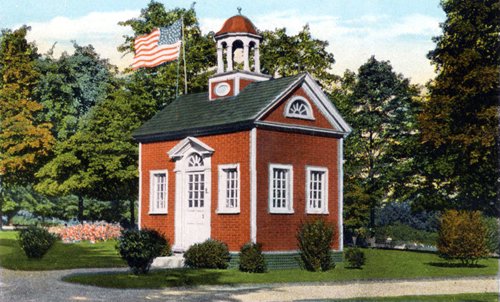 The Little Courthouse, situated in York’s Centre Square during World War I, served as a center for war bond sales and promoted the bonds in a way that today might be considered politically incorrect. An effigy of Kaiser Wilhelm II was there too. For a small sum, donors could drive nails into the German leader’s head. The Little Courthouse is seen in mothballs in its longtime home in Farquhar Park. It now serves as a fixture in a pet resort in Conewago Township. Also of interest: For decades, York’s underground comfort stations spelled relief and York’s 221 E. Princess St. home to telling ironies and Pastors denounce first Sunday newspaper publication.

York’s mayors have dealt with many serious matters of state since the Borough of York became the City of York in 1887.
E.S. Hugentugler, for one, suspended civil liberties to shore up suspicions about German-American York when America was “over there” battling the Germans in World War I… .

In the mid-1970s, Mayor John D. Krout helped bring York into the modern-age after setbacks from man-made and natural disasters, respectively: the race riots of 1969 and Tropical Storm Agnes in 1972.
And Mayor John Brenner picked up the pieces of a city low in morale and high in red ink in 2002.
But even when linked with heavy issues, York’s mayor have inspired several light moments.
That’s how today’s (5/31/09) York Sunday News column began.
To see the rest of the column detailing several chief-exec-evoked moments of levity, click here.