After this YorkTownSquare.com post – Maryland nature center offers high dam, intact mill – I received this wonderfully composed photo of the Eden Mill Dam. It sits on Deer Creek in northern Maryland, but it has decided York County ties. The dam and nearby mill provided electricity for Fawn Grove in southeastern York County for years. Don McClure, the photographer, provided a couple of more photos of Eden Mill Nature Center on my Facebook page. Also of interest: Hello, York, Stewartstown, Pa., no longer calling.

Yorkblogger Stephen H. Smith offers some background on the milk bottle that turned up at the Camp Security archaeological project recently:

“The ‘EMIGSVILLE Pasteurized DAIRY Registered’ milk bottle, unearthed at the Camp Security dig, was from the Emigsville Dairy, in business from 1903 to 1930, at 7 East Main Street in Emigsville. This info is from Don Hartman’s book “Dairies, Dairymen & Milk Bottles of York County, Pennsylvania.”

As for his own work on the dig, Stephen writes: “So far, I’ve unearthed a nail at the dig, unfortunately it is too far gone to be dateable. Also a number of below ground features, that all turned out to be long-ago rodent holes.”

More in the big dig at the presumed site of the British prisoner-of-war camp:

A drone is being used today to take aerial photos of the farmland at #campsecurity. pic.twitter.com/xFPGID7T3E 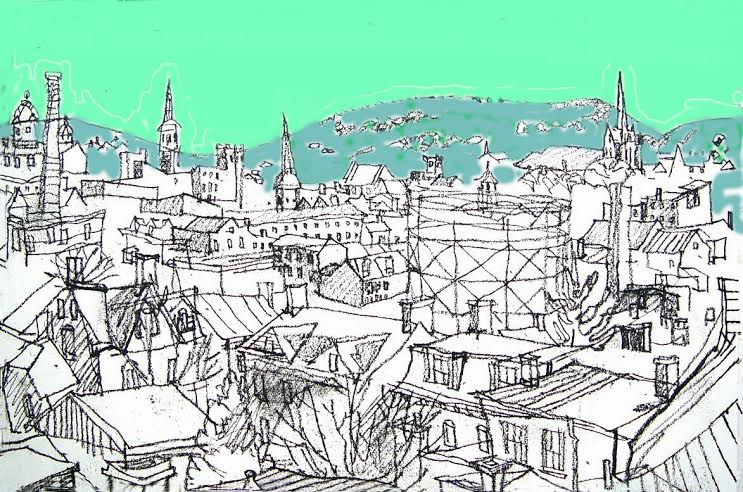 Cliff Satterthwaite captured this scene from the apparent vantage point of Cottage Hill in York City. He placed this about 1972. You’ll notice familiar landmarks here. Wonder if it was before or after the flood. maybe you can enjoy any difference?

A lot of history: This caught my eye in a short story about a Sept. 11 presentation at the Mount Also Historical Society:

Camp Michaux was located at Pine Grove Furnace and was originally a farm connected to the iron industry. The farm later became a CCC camp, a secret internment camp for German and Japanese prisoners of war during World War II and finally a church camp affiliated with the United Church of Christ and Presbyterian churches.

So much history in one place. One would like to spend a month tramping all over the Mount Alto area.

While in Franklin County, can you place this mystery photo?

+++
History mystery: Lots of interest in this old iron bridge.