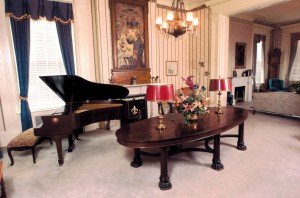 The York County Heritage Trust owns and sometimes displays 16 panels linking to York County in the American Revolution. They were painted in 1927, the 150th anniversary of the Continental Congress’ visit to York. This panel of the Marquis de Lafayette, on the wall behind the piano, is another in that series, on display at the Lafayette Club in York. This captures the toast in which the marquis supported George Washington as commander in chief, discussed years later in Lafayette’s memoirs. Also of interest: How a compelling York County, Pa., story is told – and re-told.

A commenter to a recent post says she’s obsessed with the Marquis de Lafayette, who visited York twice during his long life. She even said she’s getting contact lenses to reflect the marquis’ eye color.
Whether the commenter was real or just spamming is unknown.

The marquis apparently had a captivating personality, even getting into mirthful exchanges with the relatively somber George Washington.
The commander in chief would tease the marquis that he left his young wife in France, lest she fall for an older man — Washington himself.
And the dashing 20-year-old marquis was an astute observer of American women.
In America, a girl marries one she loves, he wrote, nothing like the arranged marriages of France.
“(I)t would be like having two at once to break a valid agreement,” he wrote, “because both parties know why and how they have committed themselves.”
We don’t know if the marquis’ eye color is accurate, but these colorful paintings capture one’s gaze.