Many respond with memories about YLT: Linked in with neat York County history stuff, Aug. 20, 2012 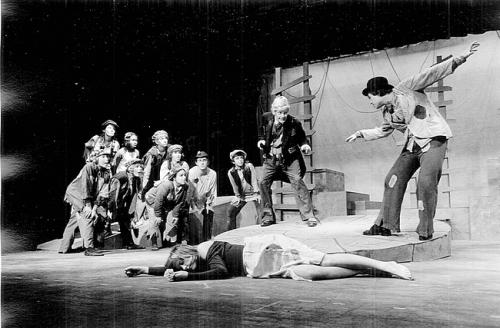 Ydr.com’s ‘Remember’ oral history series has cast its spotlight on York Little Theatre. The community theater group, formed in the Depression era,  has been addressing financial issues and recently landed veteran nonprofit exec Lynn Bergdoll as executive director. The call for memories about YLT brought numerous responses. Here Bert Smith, center, performs ‘The Roar of the Greasepaint–The Smell of the Crowd’ in 1974. Smith, who also directed the musical, was a YLT mainstay as director from from 1953 to 1982. (See a ‘Remember’ video below.) Also of interest: Stand-in stole show in YLT’s “Inherit the Wind”.

Houses of worship are being built today without costly steeples large enough to hold bells or without steeple at all.

So a way of life in which bells summoned folks to church or community events is slowly going away. Do you like the sounds of bells? Do you miss hearing them? Background: On Sundays, factory whistles punched out; church bells rang in. (Please comment below.)

One neat response from a spirited discussion on the YDR’s Facebook page:

Linda Chenoweth Harlow: “Sitting outside enjoying my coffee and just heard 1 of the 2 churches in Dallastown ring their bell. Sometimes it’s like dueling bells but it’s just a nice sound.”

Building the barn: The Pitzer Barn, on the Eisenhower Farm historic site, is undergoing a facelift. See: Bringing a local barn back to life. The Gettysburg barn is a bank barn, common around here. That means the barn was built into the side of a hill or rise, so farmers can enter via the upper or lower level.

Preserving Carroll County’s heritage: Carroll is just south of York County across the Mason-Dixon Line. It’s heritage groups are struggling, just as some in its neighbor to the north. See:  Taneytown History Museum Committee in Carroll County looks into future.

Jacoby’s shop: West Manchester Township’s Karl Jacoby has been cutting hair around here 50 years. “God has been good to me,” he told the York Daily Record/Sunday News. “I’ve been blessed with a good family, good friends and good customers.” Check out this ydr.com story on this man who is full of info.

From the archives: Antique farm equipment shows, like Old Tyme Days near Manchester, remind me of this favorite photograph. (Check out that photo of the motorized wagon.) Those old automobiles really were farm wagons with an engine. No wonder York County – as a big wagon making region, with its crossroads and such – was also an early automobile maker.

Forum of the day: From the Exchange, information on where the American Pickers are picking in Pa., and it’s not in York County.