Manchester Township’s Roundtown Elementary: These 4 lessons came from 1 period at the school 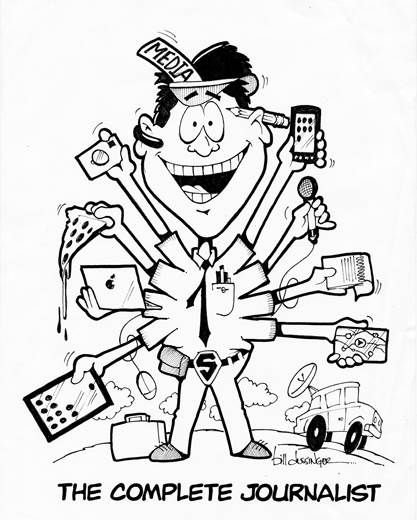 ‘Journalists use phones, tablets, computers, cameras, notebooks, and pizza!’ Roundtown Elementary third-grade teacher Amy Musone wrote on Twitter. That’s right. All of these tools have their place in the modern journalists’ toolbox – and any journalist knows that you’re often fueled by pizza when chasing after stories. Bill Dissinger illustrated the multi-tasking world of a modern journalist. Also of interest: Look out Wikipedia, here come the Murals of York, courtesy of Roundtown Elementary third graders.

Talking to a classroom of really smart, budding journalists.

Though I was doing most of the talking during that class period in Amy Musone’s third-grade room at Roundtown Elementary, I was learning big time.

All this goes to show the value of a journalist – me – getting out of the office for a firsthand look at what is going on in the community and how education changes virtually every day.

Here are four brief lessons from that one-period visit in Manchester Township:

1. The students have been assessing news stories and how reporters work.

Does a particular story convey good news, bad news or news that was “neutral,” meaning good news for some folks and bad for others?

After going through a ream of stories, the class is ranking many news stories as neutral. If a Central York sports team beats, say, Dallastown, that’s good news for the Panthers but bad news for the Wildcats.

They also had covered the seven (sometimes eight) elements of news – those values journalists use to assess whether a story is a story and how much to do in covering that event. Those factors include how close or far an event takes place from readers (proximity), how many people an event touches (impact) and whether the event just happened (timeliness).

So when I showed the class a front-page story about Northeastern Regional Police Officer Corey Sheaffer befriending Spring Forge Intermediate School student Tyler Hall, one student in the Roundtown class starting ticking off  several news values covered by the story.

The ability of third-graders to learn and then apply what they’ve learned provided a big lesson.

The class clearly viewed this story as one that should be published: A police officer helped the lone student on a basketball court and then joined him for lunch at school.

2. In introducing the story of Corey Sheaffer’s good work, I compared the moment to the the presence of the Buddy Bench at Roundtown. You remember this story that spread internationally?

The York Daily Record’s story on second-grader Christian’s project was picked up by The Huffington Post, and the digital story went viral. Today, Christian’s Buddy Bench is promoted through its own website.

Roundtown’s Buddy Bench is used in several ways, but essentially if a student feels lonely on the playground, he or she can go to the Buddy Bench. Another student will come to the bench and ask if the student wants to play or talk.

As I started making the comparison of the two moments, the students started pointing to a member of the class. Christian Bucks, now a third-grader, sat right there in the class.

That was a pretty impressive moment, particularly when class members looked through the classroom window at the bench on the playground and noted that two students were sitting on it.

I later undertook a mini-interview with Christian and walked with him over to the window to get his insights as we looked at the bench.

Students today are not only applying what they’ve learn, but they get things done.

3. I tweeted out the note about my teaching at Roundtown (at the top of this post) to illustrate to students how journalists can publish to the world. We then projected the published tweet for the class to see.

As I was doing all that, the teacher had been videoing my presentation with her iPad and tweeting out that video and other points from my presentation.

Her tweets also were projected for her students to see. In the time I completed one tweet, Mrs. Musone sent out three or more.

We then talked with the class about the need to get it right on social media before publication, that we must confirm before we publish.

So in that Roundtown classroom, we had a journalist serving as teacher and the teacher acting as a journalist.

Technology – and use of it – is a major plank in the education platform today.

I had been invited to work, joining other community members, with Roundtown’s third-grade class before.

Amy Musone’s class takes on ambitious and productive history projects, too. For example, the class developed a Wikipedia page for the Murals of York.

Still, I thought about the significant abilities of the students in that Roundtown class, the deployment of technology in the instruction process and the effectiveness of the instruction.

Later, I made it a point to drive past the one-room predecessor of Roundtown, the Center Square School, just east on Church Road.

That one-room school was right for its day, built around harvest schedules and the seasonal needs of an agricultural community.

The one-roof school education system kept in mind that children on farms gained increasing obligations at home as they got older. For example, 100 years ago, the education of many students stopped at the eighth grade.

These basic one-room buildings also lacked electricity and plumbing and were often built with their windows facing east/west to maximize sunlight.

But they did their job.

And the larger Roundtown Elementary School is right for its day a century later.

It is wired and equipped to optimize use of technology, so a teacher and journalist could communicate to the world about the good things going on in a single third-grade classroom in York County, Pa.

– For a collection of Tweets from the classroom, check this out.

– The results of the class’s Good News/Neutral News/Bad News survey.

Learning about a story about how an officer helped a boy free up a ball and later had lunch with him! @JamesMcClure pic.twitter.com/LBJPBfBdZA — Amy Musone (@MusoneClass) December 10, 2014

YorkTownSquare archives: All stories and photos from the start.