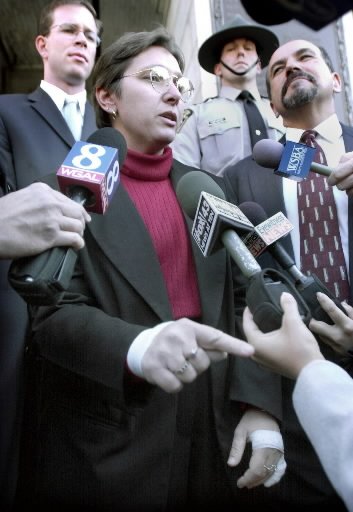 In 2002, Norina Bentzel, principal of North Hopewell-Winterstown Elementary School, talks about her encounter with the machete-wielding man. William Michael Stankewicz wounded Bentzel and 13 others before the principal and others subdued him before police arrived. Also of interest: School violence struck York County in 1970 and York County, Pa., educator recounts machete attack on ‘I Survived…’ and ‘Yesteryears’ chock-full of southern York County sites.

Melissa Nann Burke’s York Sunday News piece (1/31/11) on the 10th anniversary of a madman’s attack on North Hopewell-Winterstown Elementary School in Winterstown contained much insight.
Here are two particularly instructive moments:
Years after the attack, Norina Bentzel was influenced by the Amish meeting with the family of the man who assaulted students at the Amish schoolhouse in Nickel Mines, Lancaster County.

The Amish offered their forgiveness.
“I made the decision after that,” she said. “If they could do it, it should be easy for me.”
Bentzel subsequently wrote William Michael Stankewicz, who assailed students and teachers at her school, forgiving him for what he did.
Stankewicz, still a madman, declined to accept the letter bearing this kind gesture.
The second point links to the impact of the attack on the Winterstown community.
A family moving to this area of southeastern York County learns about the terrible day the machete man visited the school.
It was a moment that will long define the community.
It was a bloody day that could have been deadly, except for the heroism of Bentzel and others.
Indeed, this act of bravery will be burned into the memories of those in Winterstown and elsewhere in York County.
This courageous act should replace another deadly event connected to that community that has lost its seriousness, its gravitas, with the passage of time – the 1928 Hex murder of a farmer.
Winterstown was the closest incorporated area to the isolated farmhouse where Nelson Rehmeyer, a suspected witch, was killed by three superstitious assailants.
May this attack of a school never be trivialized and may Norina Bentzel be long remembered as a Christian woman bearing forgiveness, an act of heroism as large as her taming the madman 10 years ago.
Melissa Nann Burke compiled the following facts surrounding the machete attack 10 years ago.
The attack
On Feb. 2, 2001, William Michael Stankewicz, then 55, entered North Hopewell-Winterstown Elementary School with a 2-foot-long machete.
He injured 14, including 11 kindergarteners, the principal and two teachers who wrestled the weapon away and subdued him until police arrived.
Stankewicz was later sentenced to 132 to 264 years in prison. He is at the state prison in LaBelle, Fayette County, a maximum-security facility south of Pittsburgh.
In her struggle with Stankewicz, principal Norina Bentzel was severely cut on both hands and arms, incurring a shattered wrist and multiple bruises. Kindergarten teacher Linda Collier received a severe cut on her hand as she defended the children. Other injuries were less serious.
Timeline
The following is a minute-by-minute account of the machete attack at North Hopewell-Winterstown Elementary School on Feb. 2, 2001:
11:30 a.m.: A parent notices a man walking toward the front of the school.
The doorbell rings in the office, and school nurse Denise Zellers buzzes in a mother with two children, who are followed by William Michael Stankewicz.
Stankewicz pulls a machete from his left pantleg and attacks the principal near the lobby and a teacher in a kindergarten classroom.
Kindergarteners suffer minor injuries, including a broken arm, cuts, bruising and a chopped-off ponytail. There is blood in the hallway.
11:32 a.m.: York County 911 receives a call from someone at the school about a man inside chasing the school principal with a weapon.
11:34 a.m.: York County 911 receives a second call about the attack.
Principal Norina Bentzel wrestles Stankewicz and subdues him in the health suite, assisted by Zellers, who hid the machete in the hallway after Stankewicz dropped it.
Stankewicz is taken into custody by police and is non-aggressive when arrested.
11:48 a.m.: Authorities take Stankewicz to an undisclosed location.
Five children are taken to York Hospital for minor injuries, another is treated by a private physician. Three staff members are taken to Memorial Hospital.
CNN reports news of the attack, and other news media swarm the grounds, talking with parents and children.
12:30 p.m.: Children are dismissed from school, and parents of the injured students are notified. Parents arrive to pick up students.
5 p.m.: North Hopewell Township Police Chief Larry Bailets reports Stankewicz is being held on $2 million bail, noting Stankewicz has an FBI record that dates to 1996. Stankewicz is taken to York County Prison.
11 p.m.: Bentzel, flown by LifeLion to Baltimore’s Union Memorial Hospital earlier in the day, remained in surgery as doctors reattached her severed fingers.
Other trauma in Red Lion
Red Lion Area School District students have dealt with traumatic events at least two other times in the past 10 years:
— April 24, 2003: Eighth-grader James Sheets, 14, shot Principal Gene Segro and then shot himself in the head in crowded Red Lion Area Junior High School cafeteria. Sheets died at the scene. Segro was pronounced dead at the hospital.
— Feb. 7, 2005: A 10th-grade student was charged with aggravated assault, among other charges. Police alleged he assaulted another student with a hunting knife during a class.
Also of interest:
Yorkblogger Melissa Nann Burke writes about how Norina Bentzel sees God’s hand in her survival, recovery.