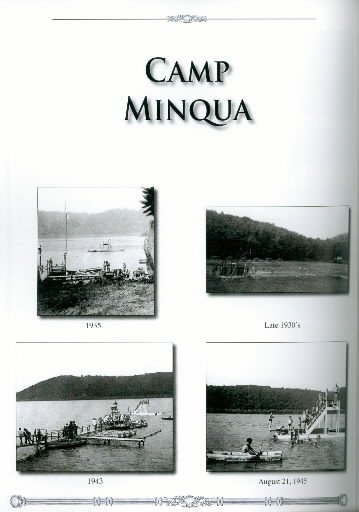 Camp Minqua, the long-remembered YMCA camp along the Susquehanna River in southeastern York County, made the news again this week. Well, very indirectly. Actually, its successor made the news. Gamler’s Campground and Boatyard is experiencing water levels so low that it’s difficult to launch and gas up boats. Those same waters provided a swimming hole for campers, Dan Meckley, camp counselor at Camp Minqua in the 1930s, recalled. He said it’s his understanding that the cabins and the mess hall, a former barn, are still in use at the campground. Meanwhile, the situation entails more than praying for rain. Work on upriver dams is causing some of the low levels. (Check out the assessment of things by the manager of Gamler’s in a video below.) Also of interest: About York County’s former YMCA camp: ‘They treasure memories of their Minqua experience’.

In time for the Fourth of July holiday week, a news release from Gettysburg:

“Just posted:  ‘On the Eve of Battle’ –  Updates and suggestions for people
on their way to visit Gettysburg National Military Park.  Read more at: http://npsgnmp.wordpress.com/

“From the Fields of Gettysburg,” the release noted, “is the official blog of Gettysburg National Military Park.

Moving a house: The day after Independence Day, not that the two are connected, Willow Valley Retirement Communities will relocate the Harnish Farmhouse. A Willow Valley release states that the historic building has stood in the Willow Street area for more than 150 years. “In order to preserve and repurpose the building, we will literally be lifting the building from its foundations in order to transport it across the grounds,” the release says. The move promises to provide a day of entertainment for some residents and employees, the release states. Details: egehman@willowvalley.org. Bet they won’t use greased logs and mules, as workers deployed in moving the Elmwood Mansion 100 years ago.

Another plug: Here’s my York Sunday News column plugging Preserving York’s upcoming picnic: York County’s hope rests in grass roots movements. The YSN piece writes through, as we say in the news business, two previous yorktownsquare.com posts. Most that I write for the newspaper – and I try to write as often as I can – appears here first.
Blog post of the day: On Buffy’s World: New golf blog to contests to win Hersheypark tickets to Gettysburg Battlefield photos.

Some good news: Northwestern Mutual is moving into a big piece of the multi-story former Futer Bros. building on Continental Square. For decades after it was built in the late 1840s, the building was known as the Hartman Building, after its original builder and owner.

So, here’s the forum of the day: Northwestern Mutual is locating in four of the five floors of the former Futer Bros. building. Is this the beginning of a rebirth for Continental Square? Please comment below.