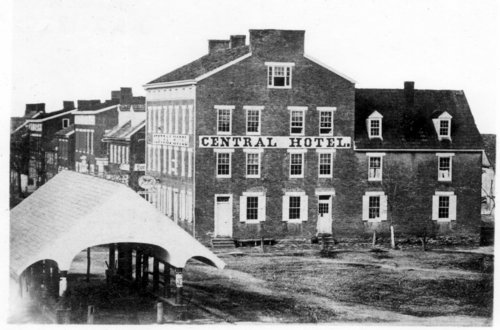 Hanover’s Central Hotel, seen here in this image from the Hanover Area Historical Society, served as headquarters for Union cavalry General Judson Kilpatrick late in the battle. This hotel still stands at the corner of Center Square and Baltimore Street. Some Union military men returned to hunt for money buried during the visit in late-June 1863. Background posts: Reader searches for Ziegler’s tavern photos, Iron Mike Guards ‘The Picket’ and Did you know this about York/Adams history?

A treasure hunter is seeking state permission to dig for gold reportedly lost by a Union convoy in Elk County during the Civil War.
This brings to mind a moment shortly after the Civil War in which Union treasure hunters returned to the Hanover area to conduct a dig… .

Here’s the rendition of the local hunt from “East of Gettysburg:”

“They didn’t stay, just enough time to search for buried treasure.
“At the time of the Battle of Hanover, some under Judson Kilpatrick’s command reportedly buried $20,000 to $30,000 secured by some unknown means. Years passed, dimming the recollections of the burial site.
“After several weeks of searching, the former soldiers departed empty-handed.
“Townspeople then took up the search, covering the countryside for miles around, also without success.”

The Elk County hunt and searches such as took place in the Hanover area makes one wonder if many areas harbor legends – probably urban legends – of such buried treasure.
Anyway, here’s is the Associated Press story on the treasure reportedly lost in Elk County:

A treasure hunter wants permission to dig in a state forest in northern Pennsylvania for a cache of gold he believes was lost by a Union convoy transporting it to the U.S. Mint in Philadelphia during the Civil War.
The legend has circulated for decades about the half-ton of lost gold–worth $20 million or more at today’s prices.
Dennis Parada believes he has found the site of the missing treasure in an Elk County state forest and is fighting to get state permission to dig it up.
The state Department of Conservation and Natural Resources said Parada needs to provide more proof before he starts tearing up state land. The department will not decide whether Parada can dig until he provides more information, spokeswoman Chris Novak said.
“There’s a lot of people that will say this story is not true, and you’ll have your share of people swearing that it is true,” said Parada, of Clearfield, who runs a treasure-hunting business called Finders Keepers. “You’ll get that with any treasure.”
According to the legend, a Union officer received orders in the summer of 1863 to lead a wagon train from Wheeling, W.Va., to Philadelphia through Harrisburg by way of northern Pennsylvania. The story claims that the route was chosen to avoid Confederate soldiers advancing into southern Pennsylvania for what would become the battle of Gettysburg.
As the story goes, the convoy–with two wagons, eight soldiers and 26 50-pound bars of gold–got lost in the wilderness, and the gold vanished.
Parada, who won’t reveal details of the location, said he and his partners made some initial digs in 2005 and found bones, a shattered bottle, a pocket knife, tin cans and two bullets. The state halted that effort, saying it’s a crime to remove historical artifacts from state lands.
Officials later examined the items and said they were newer than the Civil War era and of little value.
“The circumstances arouse my suspicions that this is some very old wives’ tale,” said Allen Guelzo, a Gettysburg College history professor who specializes in the Civil War.
He doubts that Union troops hauled gold through northern Pennsylvania, and believes it more likely would have been transported by rail through Altoona to Harrisburg. Even in summer 1863 the train would have been safe, he said.
Parada, 55, first heard the legend more than 30 years ago. In 1975, he and some friends obtained a map he thought would lead to the gold but the search was unsuccessful.
He resumed the quest in 2004, taking his case to state officials.
“They shot everything down. Everything,” Parada said.
Parada said he and his three partners hope for at least a 10 percent finders’ fee if they find the gold–which would be more than they’d get on the black market if they took it without permission.
“We stand to make as much or better and sleep at night instead of going to jail,” he said.