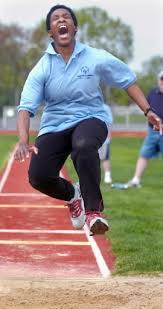 Loretta Claiborne long jumps in Special Olympics competition in York in 2007 – the competition which launched her achievements. Also of interest: York, Pa.’s Loretta Claiborne about friend Eunice Shriver: ‘She could have gone anywhere, but she wanted to help humanity’ and William Penn Senior High School Hall of Fame honors a host of York County achievers and Often forgotten: Achievements of people named on building facades.

Someone recently nominated Loretta Claiborne as one of York County’s top 25 most influential people, in a sampling conducted by the York Sunday News.
The York Sunday News named Claiborne in the top 10 sports achievers in 20th-century York County.
Though only in her 50s, she already has her name on the side of a building on South George Street in York.
But those are just local accolades… .

Born mentally retarded and legally blind, Claiborne persevered to play on a national stage.
The Boston Marathoner served on the National Special Olympics board in 1990, and received an ESPN’s ESPY Award – recognizing courage in the mold of Arthur Ashe from ESPN – in 1999.
Disney made a movie about her life, airing nationally in early 2000, as recounted in the following York Daily Record story (1/14/2000):

When Kimberly Elise met Loretta Claiborne for the first time in Toronto last April, they were both nervous. The movie actress would come face-to-face with the real person whose inspirational story would be put on film.
Elise plays the lead in “The Loretta Claiborne Story,” an ABC movie airing Sunday about the York woman who made herself into a world-famous Special Olympics athlete. At the time the two met, Claiborne was visiting the set to hear the cast read through the script.
“I had my baby with me,” said Elise, referring to her then 6-month-old daughter, Jaelarose. “And Loretta just gravitated to the baby. She loves being around kids. So (Jaelarose) was our ice-breaker.”
Elise has acted professionally for eight years, winning positive reviews for performances in The Family Channel’s “The Ditchdigger’s Daughters” and last year’s Oprah Winfrey-produced “Be loved.” But playing a real person who would see the finished performance was a new experience. And the fact that it was someone who is widely known and mental ly retarded made it even more delicate.
“I wanted to make sure I played it respectfully, without being cartoon-y or mocking,” she said. “I put a lot of pressure on myself to stay within a certain zone.”
She admitted to another round of nerves this week when the cast gathered Tuesday night in Los Angeles for a premiere screening of the movie. Claiborne, now a spokeswoman for Special Olympics, sat nearby with her sister. Elise waited and watched for reactions.
She needn’t have worried.
“I’m happy with it,” Elise said. “I think it’s everything we hoped it would be. Mainly, I was happy because Loretta was happy with it. It was really gratifying to see their response. They said they felt like we had lived in their house.”
Elise was intrigued when she first heard about the project a couple of years ago. Later, she saw a tape of Claiborne accepting the Arthur Ashe Award for Courage at the 1996 ESPY Awards, and she was convinced: She wanted to be part of the project.
It’s a story that is familiar to many around York: her early struggle to live at home and go to York City schools as a mentally retarded person; her development as a Special Olympics runner, thanks to social worker Janet McFarland; her transformation into an internationally known advocate for the disabled.
“My life didn’t happen with just me, myself and I,” Claiborne has said. “A mother, a school teacher, a coach who taught discipline – it was my community.”
Tim Shriver, president and CEO of Special Olympics, originally had the idea to make a film out of Claiborne’s life. He took the idea to Disney, which decided the project could reach the most people as a TV movie.
“This is a story that needed to be told,” said Charles Hirschhorn, president of Walt Disney Television. “Since birth, Loretta Claiborne has had to overcome physical, mental and social obst acles that for many people would be unimaginable. She is a remarkable example of personal courage.”
Disney started the project rolling four years ago, bringing in producer Suzanne de Passe (“Lonesome Dove”). Grace McKeaney wrote the screenplay and Emmy- and Oscar-winner Lee Grant signed on as director.
Elise joined the production in April. She praised McKeaney’s script but found ways to flesh out the role by spending time with Claiborne during filming. Small details, such as the way Claiborne will suddenly amaze people by speaking Russian, added realistic touches, Elise said.
The actress marveled at Claiborne’s sense of humor and zest for life.
“What I admire is that she does what she wants to do – little things like taking up bowling or karate,” Elise said. “She doesn’t wait around saying, ‘One of these days, I want to do this.’ She lives her life her own way. I’ve noticed I’ve started doing that, too. I credit Loretta for it.”
For viewers meeting Loretta Claiborne for the first time Sunday night, Elise said there will be something for them to learn, too.
“My hope is it will inform people about the lives and open up doors for people with mental challenges,” she said. “And maybe it will help people with mental challenges understand they have the right to live their lives and pursue their dreams.”
The movie:
ABC will broadcast “The Loretta Claiborne Story” Sunday from 7 to 9 p.m. on “The Wonderful World of Disney.” The movie stars Kimberly Elise (“Beloved”) and the Emmy-award winning Camryn Manheim (“The Practice”). Elise plays Claiborne; Manheim plays Janet McFarland, the social worker who helps Loretta enter the Special Olympics. Lee Grant, who has won Emmys and Oscars for her acting and directing, directed the film. The movie traces Claiborne’s life, from her early struggles on the streets of York to her international success as a Special Olympics athlete and advocate.

Additional background posts: The people behind the names on building facades and Looking for a local history project? and York native and Special Olympian Loretta Claiborne: ‘Role model for others with disabilities’.