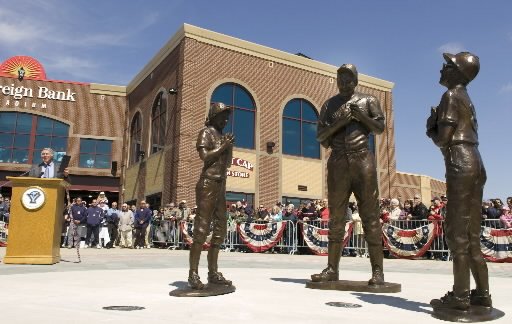 About 8,000 fans have walked across Brooks Robinson Plaza and passed the statue of the O’s legend on their way to the two York Revs games this season.
The statue, sculpted by the prolific Lorann Jacobs, reminds fans that Brooks started his professional career in York.
But no such reminder stands in Baltimore, where Brooks spent his entire major league career… .

A recent York Daily Record/Sunday News editorial (4/11/08) notes that some are demanding statue parity in Baltimore. Some folks want a Brooks statue there, too.
It’s nice being on the winning end of a controversy.
Here’s that editorial, headlined “York loves Brooks Robinson. More so, it seems, than the city where he became a baseball legend”:

Brooks Robinson’s stay in York, playing for the old York White Roses, lasted only a few months. He was a gangly 18-year-old kid from Little Rock, Ark., a prospect in the Orioles’ system, when he reported to the Piedmont League team in the spring of 1955.
Brooks was a second baseman, but White Roses manager George Staller wisely recommended that he move to third base.
He joined the big-league team later that season, seeing his first action in September against the Washington Senators. He replaced another rookie, Kal Segrist, scratched because of injury.
The notion that Orioles manager Paul Richards would believe that Kal Segrist was a better baseball player than Brooks is cause for cognitive dissonance.
Mr. Segrist left major league baseball in 1955.
Brooks, as you well know, went on to become one of the greatest players in the history of the sport, arguably the best third baseman to ever play the game. (Phillies fans will dispute that, countering with Mike Schmidt. That’s an argument that might never be settled.)
Brooks’ brief stay in York forever cemented his relationship with the community. He made some life-long friends here — most notably, former York County Clerk of Courts and local baseball legend Marlyn “Curly” Holtzapple, as well as former county Commissioner George Trout — and he has always held York in high esteem.
So it made complete sense that when professional baseball returned to York, the community would find a way to honor Brooks.
The entrance to the ballpark was named Brooks Robinson Plaza.
And last Saturday, the York Revolution unveiled a bronze statue of Brooks in the plaza bearing his name. It depicts Brooks in his York White Roses uniform, signing autographs for two kids.
It’s a fitting tribute to the man and his legacy.
It should be cause for celebration.
But 50 miles down Interstate 83, it’s caused a controversy.
A group of fans in Baltimore have been lobbying to have a statue of Brooks erected at Oriole Park at Camden Yards.
The group has commissioned the statue. They had a miniature model made. The Maryland Stadium Authority has reviewed it. The only thing holding it up, one of the group members told the Baltimore Sun, is Orioles owner Peter Angelos.
This should be a no-brainer. Other major-league teams have honored storied players of their past — Stan Musial in St. Louis, Tony Gwynn in San Diego, Ernie Banks in Chicago, Roberto Clemente, Honus Wagner and Willie Stargell in Pittsburgh. Even outside of baseball, sports entities have honored their legends — witness Joe Paterno’s statue outside Beaver Stadium.
The Orioles have honored their legends in the plaza outside the Eutaw Street entrance to the ballpark; their retired numbers, including Brooks’ No. 5, are depicted in sculpture around the plaza.
But Brooks — and down the road, Frank Robinson, Cal Ripken Jr., Jim Palmer, Eddie Murray and Earl Weaver — should be honored at the stadium with a statue.
Brooks, as is his nature, is humble about any honors. “You know, they already honor us,” he told the Sun. “We have the numbers out there.”
The Orioles don’t have to do it for Brooks. They have to do it for their fans. Brooks is an icon to fans, the face of the Orioles, a representative of the Oriole Way they like to talk about. The Orioles, though, have only said that there are no plans to honor Brooks and other legends of the once-great franchise with such a tribute.
York did it, and Brooks spent only a few months playing ball here.
He played 23 years in Baltimore.
He deserves the honor.