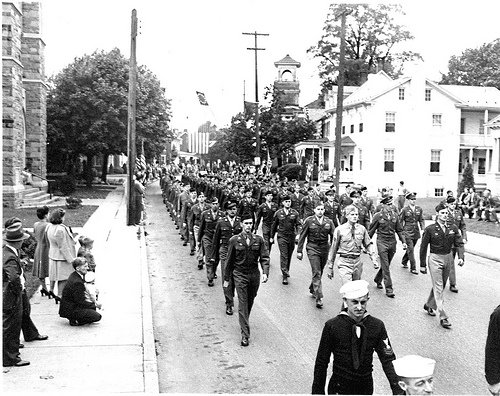 This image comes from the Dallastown Historical Society’s Flickr site titled ‘WW2 Parade “up” Main St.’ It shows vets of World War II marching along Route 74 in Dallastown. ‘I think this one is the source for the mural on the wall of the South Queen Street branch of Commerce bank. This was taken from in front of Eberly’s Funeral Home looking west on Main Street,’ the caption states. The caption writer appears to be right. Check out the colorized version mentioned at the now-Metro Bank: Can you locate this town? (See related photograph below.) It was about a decade after this return that Priscilla Hoffman wrote about in a recent York Sunday News column. Also of interest: Dallastown Area Historical Society does right thing: Promoting borough history on Web, too.

Priscilla Hoffman, a New Bridgeville resident, wrote one of those guest columns in the York Sunday News recently that you just can’t put down.

She wrote about change in Dallastown borough in the past 50 years.

It’s possible to be overly nostalgic about change.  But a study of change can also be instructive. The latter was my take on Priscilla’s column.

Many small businesses are gone in Dallastown and other towns in York County. They’ve been replaced by larger, regional businesses, often parts of national chains. But I wonder how many of the houses in Dallastown have small businesses in home offices now: Residents buying and selling on eBay or vending Mary Kay products. They might just not have a storefront or a shingle out front. Maybe things haven’t changed that much. Perhaps Priscilla could touch on that in a sequel.

“The subject for my column started out as a story about Dallastown — how some things change while others remain the same. Then last week I visited a childhood friend, Barry Dubs, who now lives in Aaronsburg, Pa. We sat by a campfire and reminisced of good old days in the ’50s and came to the realization that perhaps 95 percent of Dallastown’s Main Street businesses are gone.

“As you travel through this quaint little town, about a mile long from one end to the other, it’s hard to believe it has undergone such a transformation in so few years. Only five businesses from the 1950s are still there: Devono’s Dry Cleaners, Eberly Funeral Home, Glatfelter Furniture, Sechrist’s Meats and Gene Snyder’s Barber Shop. (Gene helped me fill in the blanks in my story.)

“The neighborhood kids in the west end of town were close. We played games until dark. We went on hikes, rode our bikes, went swimming at Zimmie’s pool or hunted for fool’s gold in any vacant lot we could find. In winter, we built igloos in our yards and went sledding on Broad Street. We went to each other’s homes for birthday parties and picnics. At night we searched for frogs and worms by flashlight. We climbed trees and jumped into piles of leaves. We walked to school together and then to the movies at the Dallas on Friday nights.

“The parades were a treat for townspeople. The Memorial Day parade was the small one, blink and it’s gone. The Centennial Parade in 1966 was the biggest ever with President Lyndon B. Johnson in attendance. The Halloween Parade is one of the biggest around, always has been. My father, Jack, always created fabulous costumes for my family. Dallastown residents still ask me about them (see photo at right). They talk about the Old Gold cigarette pack (that’s my Mom, Joan, inside). The one thing you don’t see (I do not remember, but have been told), I was the little match blazing a trail beside the pack.

“Rutter’s has replaced Yeager Myers’ Atlantic Gas Station, where an attendant pumped your gas, washed your windows and checked your oil. Gohn’s Esso is now Tom’s Exxon, Nevin Neff’s Gas Station is Frey’s Auto, Paul Deller and Jack Lamotte had gas station/garages. Red’s Auto Body was formerly the Super Service Station with the Knotty Pine restaurant attached and a speakeasy in the basement.

“Clipp’s Auto Sales show window now houses Roburrito’s eatery and Wagaman’s Auto Repair in back. Next door was Joan Hoffman’s Beauty Shop (Mom), while directly across was Jamison’s (spray painted) Christmas trees. I always talked my parents into buying a mint green tree for me.

“Fifes is now Roma’s Pizza, Streavigs is presently Sal’s Italian Restaurant, and Shenbergers has been the home to Clewell Nationwide Insurance for more than 21/2 decades. Harvey Deardorf owned the food, oyster and vegetable store and would peddle his wares around town while pulling a wagon.

“Plumbers were in abundance: Deller, McWilliams (still in business), Holtzapple (my uncle), Waltersdorf and Chronister. Main Street still has two of its barber shops, Gene Snyder and Linus Strayer (Lynus), but Clousers and Capatchs have closed.

“Main Street had four doctor offices (and they made house calls), Doctors Heller, Piper, Hoover and Hopkins. The dentists at the time were Doctors Blymire and Rojahn.

“Funeral services were held at Eberly or Ehrhart Funeral Homes at different ends of town. Glatfelter Furniture once served as a funeral parlor where the caskets were built, bodies embalmed and service held for $55 (but that’s another story!).

“The town clock stands in the square where Zarfoss Hardware once did a thriving business and the sewing factory across the street was torn down. Turkey Hill is there now. The Cut Rate Pharmacy (on the other corner) had an ice cream shop; it became apartments.

“Apologies to those who were enjoying this trip back in time, as I am limited to the amount of words I can write. There’s so much more, restaurants, beauty parlors, post office, specialty and dress shops, appliance stores and car dealers. How about joining me at a later date for ‘Main Street, the sequel’?”

See the full column A trip down memory lane (Main Street) in Dallastown. 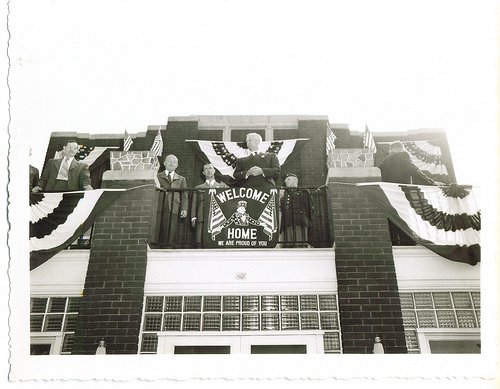 This photograph came from the same event, the parade for returning veterans. ‘It is taken looking up at what appears to be officials/dignitaries of the parade giving a speech. I am not positive, but it looks like Eberly’s Funeral Home they are on top of. No one has been able to identify any of the people in the photo yet.’ Many more photographs of the parade and in and around Dallastown are available at the historical Dallastown historical group’s Flickr site.