Look at the size of that Keystone Marker: Linked in to York County history, 2/24/13 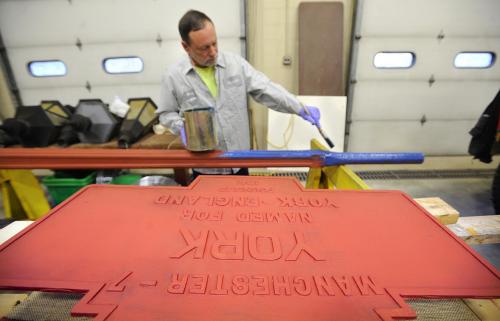 Keystone Markers, those often-forgotten signs along state highway planted between the world wars, are undergoing renovation through Pennsylvania. This marker stood unnoticed, really, on East Prospect Street near the York city line. ‘It’s one of those things, I guess you just don’t pay a lot of attention to it,’ city Public Works Director Jim Gross in a ydr.com story, ‘York city workers polishing up their history.’  Notice the size of the marker, something that isn’t immediately noticeable when it’s elevated on a pole. That will happen soon. Keystone Marker Trust is calling attention to these markers across the state. Also of interest: 5 quick facts about East Market Street’s Welcome to York signs.

York city’s work on the Keystone Marker drew praise from York Daily Record/Sunday News’ editorial board in the form of a Rose:

“To York director of public works Jim Gross and his crew for restoring the old Keystone Marker sign on East Prospect Street. These historic town markers were placed between the 1920s and early 1940s.”

Indeed, Jim Gross and his people again and again show a sensitivity to York’s heritage’s, one of the city’s most marketable assets. The good work comes despite scarce resources. A White Rose to them.

Quite a collection: In New Oxford area, everyone seems to collect antiques and memorabilia. The Hanover Evening Sun tells about a Cross Keys resident who has a collection ranging from Billy Graham to sports star stuff.

Forum of the day, I: Loganville gained the headlines recently as the hometown of philanthropist Art Glatfelter, who passed away last week: . Do you have memories of this nice town? What do you like best about Loganville? Please comment below. Background: Loganville house, home of big pneumonia case, should be preserved.

Forum of the day, II: Red Robin restaurant isn’t coming to the former Wright Bros. dealership site at South Queen and I 83: . Disappointed? What restaurant would you like to see to come in? Comment below. Background: How about Gino’s?