Longtime York County district justice: ‘You can wait for my book’ 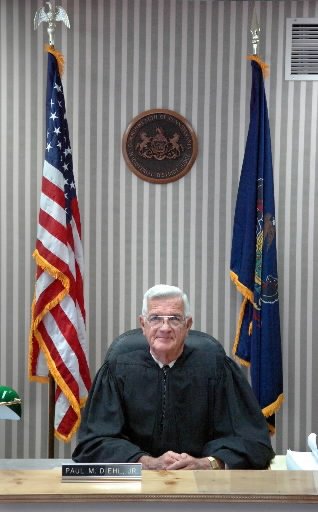 The state House of Representatives gave kudos this week to Senior District Justice Paul M. Diehl Jr. for his 50-plus years of service. Background posts: For years, York County part of major court cases and Witman’s murder among county’s most notorious cases.

In his early years on the bench, district court was in the basement of Diehl’s house. That courtroom consisted of a desk and two tables – for the prosecution or plaintiff and the defense.
But if called to another area to preside over a case, the story said, Diehl made do with what was available.
“I had many a hearing at a kitchen table,” he said.
Today, some district justices work out of courtrooms fit for a common pleas court judge.
Here is Rick Lee’s story (2/26/08) on a state House ceremony honoring Diehl:

The state House of Representatives recently honored District Justice Paul Diehl, who retired after more than 50 years of service. Retiring Senior District Justice Paul M. Diehl Jr. got a hug and a House of Representatives citation Tuesday from Rep. Beverly Mackereth.
Diehl was recognized by the House and honored before York County’s district justices for his 50-plus years of service.
“We are honoring somebody who has dedicated most of his life to public service,” said Mackereth, R-Spring Grove. “He cared about people, he cared about people in his community. He’s just a terrific man.”
Diehl was appointed to the bench in Heidelberg Township in 1957 by Gov. George Leader. He retired as a full-time justice in 1992 before resuming his duties by filling in for other justices throughout the county and elsewhere as a senior district justice.
Diehl believes he is the oldest and longest-serving district justice.
Since April 2007, he has been assisting District Justice Harold Kessler with the heavy caseload in Springettsbury Township.
Diehl accepted the citation and hug from Mackereth and told the audience, “You can wait for my book.”