Locating Johnson Controls’ Grantley plant is easy, but can you find its facility just east of York? 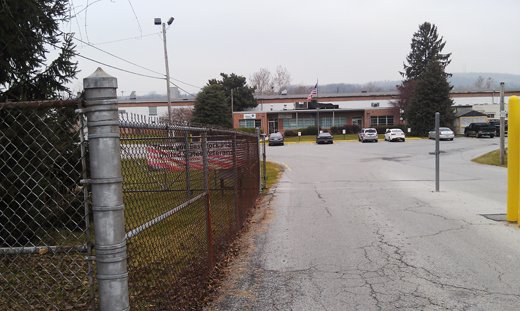 Johnson Controls has been in the news with word that testing facilities in the York area might move to Hopewell Township in southern York County or Hunt Valley in northern Maryland. News coverage notes that Johnson Controls – formerly York International, Borg-Warner and a host of other names since 1874 – operated an plant in Spring Garden Township, east of York City, to bookend the better known Grantley plant in that township, west of York. Can you locate where Johnson Controls’ plant, sometimes called its East York plant (seen here), is located? (See answer below.) Also of interest: Check out these stories and photographs about Johnson Controls and its predecessors.

Where is the Spring Garden Township plant just east of York that mirrors the long-time and well-known Grantley facility on the west?

News coverage referred to its address as East Philadelphia Street.

So I asked a group of four astute observers of York County if they could pinpoint the location of that Philadelphia Street plant, sometimes called the East York plant.

None knew and neither did I.

So I took a field trip the next day and located the plant. It’s not really on Philadelphia Street. It’s at the end of Ogontz Street, as far north as you can go on that street.

It’s in a remote pocket in the middle of a lot of development. The thing is that Johnson Controls’ plant is tucked into an area that few motorists see.  If you exit Interstate 83 on Market Street heading west, you normally head to East Market Street.

If you would take East Philadelphia street, you might see the plant. When you come to the Ogontz Street intersection, take a right and you’ll see the plant. You’ll have to turn around though because the street dead ends at the plant and you’re advised to keep out.

The plant is also visible from the interstate before you turn onto the first Market Street ramp to head west. But it’s a low rectangular-shaped building with no identification.

All this is good fun, but it’s interesting that a large company with such a large presence in the York area would have a such an obscure plant.

Could you have located the plant before reading this? Please comment below. 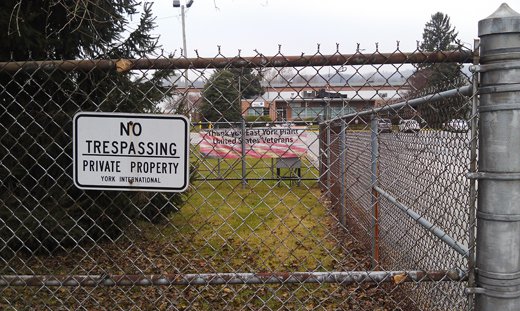 The sign out in front of Johnson Controls’ plant just east of York City references the company’s former name, York International. Beyond that is a sign honoring Johnson Controls’ veterans. Employees of the company have  been visible in the armed forces throughout history. In World War II, for example, 1,200 employees served and 25 died. Further, those staying behind on the home front worked on defense projects spawned by the York Plan and other defense initiatives. ‘The Yorks’ undertook work for the Manhattan Project, among other top-secret projects. Also of interest: For a wrapup of  Yorkco in World War II, check out: What is more York County than Yorkco, now Johnson Controls?