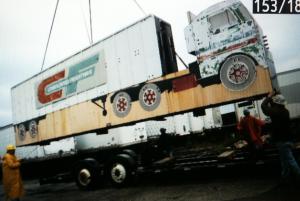 A truck-shaped sign is an artifact of history. Yup, where else but history-rich York County would produce a sign, equipped with lights that make the truck’s wheels appear to rotate. And it would then be recycled as a museum piece. That museum – American Truck Historical Society – is in Kansas City, but it’s good the county could donate a piece of its plentiful heritage to the home of the Jayhawks.  This sign bearing a Consolidated Freightways logo stood along Interstate 83 at the Emigsville exit for years.  For more, see Truck show coming to York. Also of interest:  This REO Speedwagon delivery truck is thought to have rolled through the streets of York, Pa.

The West Manchester Mall is for sale.

There’s talk in the York Daily Record/Sunday News story telling about the availability of this west side icon about turning it into a power center.

That’s a sign of the times, an evolution from covered malls to a group of open air big boxes, like the Yorktowne Center in Springettsbury Township.

Story of the day: The Associated Press is reporting – “They’re making apple brandy and selling rye whiskey at George Washington’s Mount Vernon estate in Virginia. Expert distillers will be at Mount Vernon’s Gristmill and Distillery on Wednesday, a few miles from the Mount Vernon mansion, to whip up a batch of 18th-century style apple brandy. That comes as the estate prepares to sell 300 bottles of aged rye whiskey that was distilled and barreled two years ago at the gristmill. The bottles will sell for $185 a pop beginning Oct. 22. The whiskey was distilled according to Washington’s own recipe, found in mansion records.”

Heritage groups are pulling out all stops to sustain themselves. The other day, ghosts. Today, spirits.

Forum of the day: Exchangers are still on defunct York County eateries.