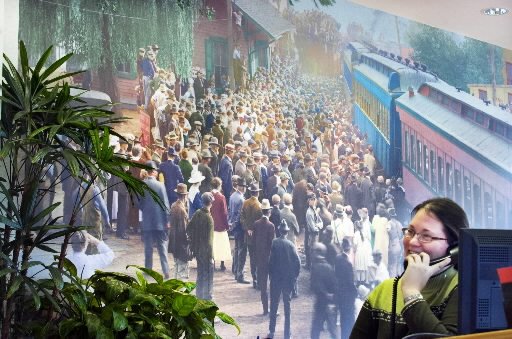 Kendra McChalicher of Windsor Township’s Commerce Bank answers calls in front of the mural at the bank branch. The mural is a colorized photo of the Red Lion Ma & Pa train station taken in 1917. It shows people saying goodbye to men leaving to fight in World War I. (See additional mural below). Background posts: Civil rights heroes stand out at Bradley exhibit and Murals of York, revisited.

Commerce Bank’s murals of meaningful York County scenes are well-known to customers.
And now others know about the colorized photographs on the walls of the banks that are tied to the part of the county where each branch is located… . 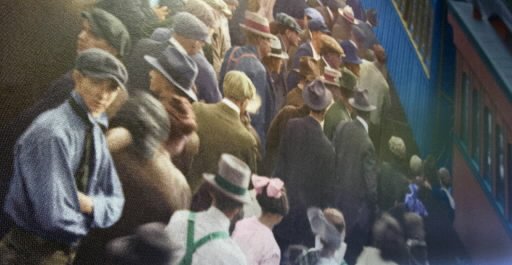 A woman visiting the Windsor Township Commerce Bank branch in 2001 recognized herself as the little girl with a bow in the photo, a bank representative said.
A York Daily Record Sunday/News story explained about the bank’s attempt to connect with the community. Press restrictions meant that the photographs in the newspaper appeared in black and white.
Fortunately, we have the colorized versions here.
Here’s the story (1/20/08) that helped spread the word about these new murals of York County.

People came from all around to see the soldiers off as they left their home town and headed out to fight in the first World War. People in the crowd came from various backgrounds, including businessmen and farmers.
Nearly all the men wore brimmed hats with bands, younger guys donned caps. Most women were fashionable in large hats and long gowns, while the girls sported large hair bows.
That’s the scene depicted in a photo taken in 1917 of the former Red Lion Train Station. The picture, which hangs in the town’s historical society, was enlarged to about 8-by-14 feet, colorized and made into wallpaper for a mural that decorates the back of the customer service area in the Commerce Bank on Cape Horn Road in Windsor Township.
Mary E. Wilt-Smith, vice president and retail market manager for Commerce, said each of the bank’s 33 area branches – in counties including Berks, Dauphin, Cumberland, York, Lebanon and Lancaster – features a distinctive mural that showcases a location or event significant to the local community.
York County has other branches, too:
· The Arsenal Road branch in Manchester Township includes a shot of York’s Center Square circa 1868;
· The Haines Road branch in Springettsbury Township displays a photo of the M.B. Spahr Company in 1890; and
· The Mount Zion Road branch in Springettsbury shows a picture of the former Avalong Dairy Restaurant from 1956.
“It’s local history,” Wilt-Smith said. “A lot of people identify with the different sites. … We have a lot of people that comment on the murals.”
Customer response
Daune Sitler is a native of the Red Lion area who now lives in Windsor Township with her husband, Barry. She was in the town’s Commerce Bank recently taking care of business for
Barry’s Country Food Market, which has been in her husband’s family for many decades.
Daune Sitler recalled walking by the train station when she was in school. She also has fond memories of riding a train from Red Lion to York and back. The bank’s mural reminds her of a simpler time, she said.
“It was a very trusting society,” she said as she studied the mural. “I think this is out of this world. I was blown away when I saw this … I really appreciate the past.”
Special places
Other local businesses also use local images to bring back memories of special places.
For instance, York native and artist Brenda Wintermyer, who co-owns City Art Studio Gallery on Philadelphia Street, painted her memory of the former Stony Brook Drive-In Theater. To capture the spirit of a night at the drive-in several decades ago, she studied the backs of vintage cars that she painted in the drive-in parking lot.
Her artwork was then scanned in high resolution, enlarged and made into wallpaper.
Today, the mural is the focus of the community room at Stony Brook Gardens in Springettsbury Township.
The new housing community, for people age 62 and over, was built on the site of the former drive-in.
Your thoughts?
Have you spotted decorations with a meaning at area businesses? Talk about it at exchange.ydr.com.