Something missing from the square in Gettysburg? Linked in with neat York County history stuff, Dec. 2, 2011 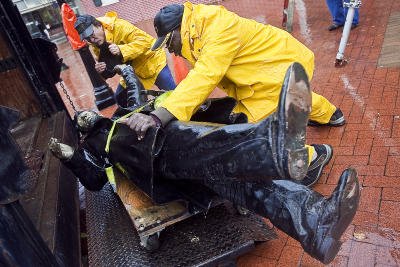 This normally upright statue of Abraham Lincoln, so prominent on Gettysburg’s square, is seen in a reclining position. Abe’s on his side, ready for shipment to a repairman in New Jersey. The Hanover Evening Sun provided this photograph and reported:  ‘Known officially as ‘Return Visit,’ the bronze installation outside The David Wills House includes a statue of the common man, which is endearingly called ‘Perry Como’ by many Gettysburg residents, and the most true-to-life statue of Abraham Lincoln ever crafted.” For more, including a photograph of Abe, standing tall, visit: Popular Lincoln statue removed for repairs. Also of interest: Gettysburg battlefield statue gets new noggin.

From the York Daily Record/Sunday News:

Do you remember seeing Santa at the Bon-Ton back when the department store was still in the city?

Whatever your memories are, we would love to see old photos of yourself or your family celebrating the holidays from the 1950s, 1960s and 1970s.

Send your photos to Emileigh Clare, eclare@ydr.com, for a future article. Include your name, age, municipality in which you live and a contact number. Call 771-2092 with any questions.

Here’s just one Downtown York memory, the chair on which Santa sat.

Mini-review: YDR/YSN’s entertainment editor Pat Abdalla gave this snapshot of the new book on a controversial Yankee Civil War general: ” I picked up a biography of Dan Sickles, ‘American Scoundrel.’ It’s written by the man who wrote Schindler’s List. It’s very entertaining and, so far, an easy read. I knew he was a character, but I didn’t know how much of one he was. ”

Intrigued? The Hanover Evening Sun posted this headline: “Dusting off a treasure in Hanover.” Discover that treasure at (hint): Eatery.

Recommended blog post: Buffy Andrews has her weekly best of blogs over at Buffy’s World.

Hope to see you: Reminder that Scott Mingus and I are signing our “Civil War Voices” and other books at Brown’s North in Emigsville from 11 a.m. to 2 p.m. Saturday.

Forum of the day: Discuss modern day Gold Rush (the drilling in Northern Pa.) and what that drilling has done to old towns in northern Pennsylvania on The Exchange.