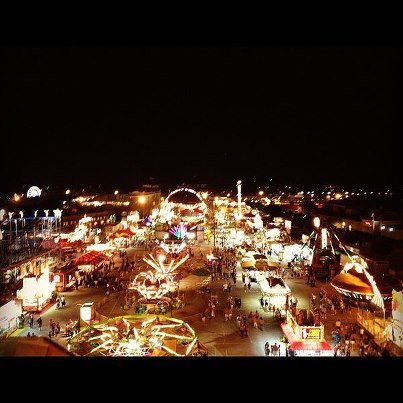 This is my favorite York Fair photograph so far this year. It appears as part of a slideshow featured in Yorkblog’s Buffy’s World. It’s an Instagram photo from fairgoer Mandy Dawson. If you want to see York Fair photos displayed on a Pinterest board, check out: York Fair photos, 2012. With the growth of smart phones, it is safe to say that this year’s York Fair is the best documented in a history that goes back the 18th century. Historians may be studying these photos some day as artifacts taken by fairgoers, as compared to professional photographers. Also of interest: Teddy Roosevelt at the York Fair: ‘I know York county farmers are prosperous. Their barns are bigger than their houses’

Glen Rock’s Foust distillery, in the news recently because of the demise of its smokestack, continues to pop up everywhere.

I noticed recently that several old Foust bottles, valuable collectors items around here, are on display at the York County Heritage Trust, 250 E. Market St. They’re in case exhibit in the lobby, so you don’t have to look very hard.

And most interesting, one still is filled with contents. Looks almost like cough syrup.

Annual journal to be released: A Book Buzz post tells about the soon-to-be released scholarly journal published by the York County Heritage Trust.  The Journal of York County Heritage will be unveiled at a members-only event next week and then available for sale to the public. Yorktownsquare.com did some previewing itself: By this count, York County hosted 3 prisoner of war camps.

History sleuthing: Genealogists are increasingly using DNA to fill in blanks in completing family tree. Fascinating topic that propelled this ydr.com story to top 10 in most viewed recently.  A program at the South Central Pennsylvania Genealogical Society recently focused on this topic.

Covering Washington: West York grad Bob Smith covered seven presidents in his long career in journalism. He tells about his experiences in his memoir: God Gave Me a Mulligan.

Lake changes hands: How do you sell a lake? Well, Glatfelter sold Glatco Lake. The Heidelberg Township site was sold to a nearby landowner.

Blog post of the day: Scott Mingus’ Cannonball updates status of Gettysburg’s Seminary Ridge Museum, set  to open on July 1, 2013, for the 150th anniversary of the Battle of Gettysburg.

Forum of the day: Exchangers are discussing native plants, a growing hobby around York County. 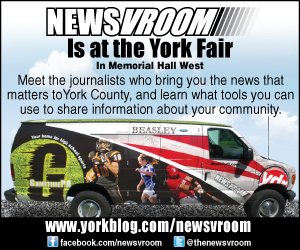 Come out to meet York Daily Record/Sunday News journalist – and the NewsVroom.